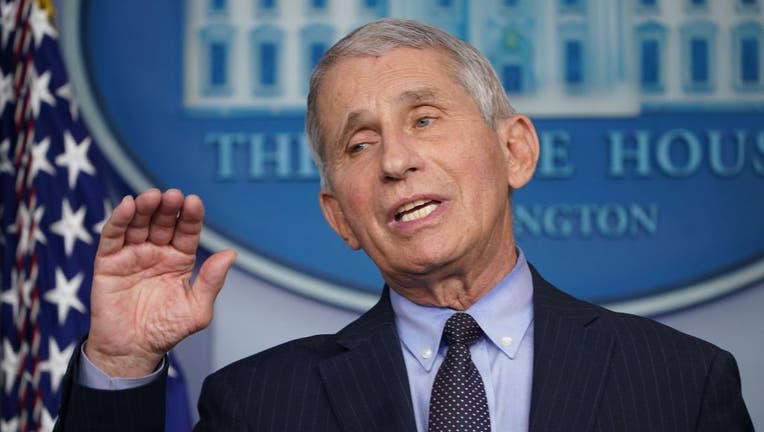 Director of the National Institute of Allergy and Infectious Diseases Anthony Fauci speaks during the daily briefing in the Brady Briefing Room of the White House in Washington, DC on January 21, 2021.

FOX NEWS - Dr. Anthony Fauci said on Sunday that the U.K. variant strain of coronavirus does appear to be more deadly, but what this means for vaccine efficacy is still unknown.

The U.K. strain had been widely reported as being a more contagious strain of the coronavirus, but experts had warned that it was not a more deadly variant.

Now, new data suggests that the variant is indeed more deadly, which Fauci discussed during an appearance Sunday on CBS' "Face the Nation."

"When the British investigators looked more closely at the death rate of a certain age group, they found that it was 1 per thousand, and it went up to 1.3 per thousand in a certain group, so that’s a significant increase," Fauci told host Margaret Brennan.

British Prime Minister Boris Johnson revealed on Friday that the new variant appears to be as much as 30% more virulent, based on death rates among patients 65 or older.

The U.K. strain has been detected within the U.S., with cases recorded in 22 states so far.

"We want to look at the data ourselves, but we have every reason to believe them," Fauci said, referring to British medical professionals. "We’re going to look at this and follow this very, very carefully because these things evolve."

"We need to assume now that what has been circulating dominantly in the U.K. does have a certain degree of increase in what we call virulence, namely the power of the virus to cause more damage, including death," he added.

The Center for Disease Control (CDC) has projected that due to its more contagious nature, the U.K. variant will be the dominant strain in the U.S. by March.

Many are therefore concerned that the current vaccination effort might be in vain, but Fauci has cautioned that effects on vaccine efficacy remain unknown. Even in the case of reduced efficacy, Fauci believes the effect would be minimal.

"When we look at the effect of the chain, this lineage that is the U.K. lineage that is in at least 20 states in the U.S., the vaccine-induced antibodies … seem to continue to be protective against the mutant strain," Fauci explained. "It is a very minor diminution, but the cushion that you have of efficacy is so large that it’s not going to negatively impact."

Fauci instead stressed the importance of continuing to vaccinate as many people as possible, arguing that once more people are vaccinated, it will help prevent further mutations of the virus from taking root.

Additionally, Fauci called for greater investment in "genomic surveillance," which would help officials determine if and when new strains of the coronavirus enter the U.S.

The South Africa strain has raised some concerns as well, as it has shown to decrease the efficacy of some antibody treatments.

So far, no cases of the South Africa variant have been discovered within the U.S.