The Orlando Free Fall ride at ICON Park is closed as an investigation is underway, but now the family of the teen wants it shut down for good.

Orlando, Fla. - Editor’s note: Since this story was published, questions have been raised about the true identity of "Shay Johnson," who claimed to be Tyre Sampson’s cousin and was collecting signatures for a petition. Sampson’s family has told officials that they do not know Johnson and that she is not a member of the family. Johnson spoke to several media outlets, including FOX 35, and attended events and memories in honor of Sampson, claiming to be his cousin. No charges have been filed, according to the Orange County Sheriff’s Office.

The Orlando Free Fall ride at ICON Park is closed as an investigation is underway, but now the family of the teen wants it shut down for good.

Tyre Sampson fell to his death on the Orlando Free Fall ride at ICON Park on Thursday night. Now, a cousin of the 14-year-old started a petition to shut down the ride for good.

"I would like this ride to be taken down," said Shay Johnson, who said she was Sampson's cousin. "My cousin lost his life over this ride. I don't feel it's safe, and feel it should be shut down before someone else's family have to go through what we are going through."

The drop tower ride will remain closed as state inspectors look into what caused the tragic fall.

The petition got pages of signatures Sunday from those visiting the memorial. 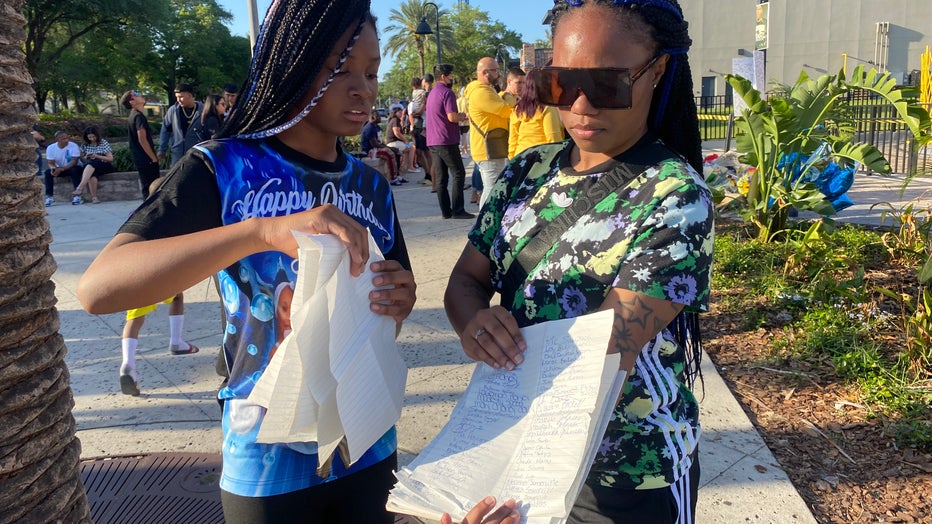 "This ride needs to go," said Ashanti who signed the petition."It's not fair for anyone to come and ride this ride. It's not fair."

"We have kids ourselves, so this is someone's child when it comes down to it. And any type of sympathetic feeling that you have as a human being you will try to come down here," said Edwards. "As a role model in the TikTok industry, I feel like that's what we can do. Show our support and help the family."

There will be a community balloon release for Tyre Monday night in front of the ride at 6 pm.