George Floyd's family reacted moments after a jury convicted three former Minneapolis police officers for violating Floyd's civil rights in his death in May of 2020.

ST. PAUL, Minn. (FOX 9) - A federal trial jury has found the three other Minneapolis police officers guilty for violating George Floyd's civil rights during the deadly arrest on May 25, 2020.

The jury reached the verdict after 13 hours of deliberating – Seven hours on Wednesday, another six on Thursday. The jury started deliberating just before 10 a.m. Wednesday. The case went to the jury after four weeks of testimony from more than 30 witnesses including all three defendants. The trial began on Jan. 24.

Federal courts do not allow cameras inside the courtroom. For the latest information, watch FOX 9 News at fox9.com/live, FOX 9 News App and FOX 9's YouTube.

A jury has found three former Minneapolis police officers guilty on all counts in the federal civil rights trial following George Floyd's death in May 2020.

The federal trial jury was made up of eight women and four men, all of them white. The jurors come from nine Minnesota counties: two each from Hennepin, Ramsey and Olmsted. One each from Anoka, Washington, Scott, Nicollet, Blue Earth and Jackson.

MORE: Who are the jurors seated in federal civil rights trial of 3 ex-Minneapolis officers in George Floyd's death?

Chauvin was convicted of murdering Floyd in a trial in Hennepin County last year. He pled guilty to two federal civil rights charges in December. Both involved using unreasonable force, one for Floyd and the other for a similar, though not fatal, knee restraint on a teenager in 2017.

Prosecutors asked for a 25-year sentence, but that decision remains in limbo.

After the verdict came down, we heard from George Floyd's family who said they were relieved by the jury's decision.

"I'm grateful what all the attorneys did today... they did a hell of a job. After watching what just happened with Kim Potter, I was like, 'I'm still going to believe and I have faith," said Philonise Floyd, George Floyd's brother.

Philonise Floyd also used the verdicts to push for the federal bill to bring changes to policing nationwide. The bill was considered last year in Congress but ultimately stalled in.

"Times, you know, will be a lot harder for me still, because I can't get my brother back," added Philonise. "At the same time, I hope Congress, the Senate  -- whichever, whoever it is -- they're looking at what's going. Because if people are being transparent and speaking and the jury said "guilty, guilty, guilty.' Then up there in Congress, they ought to go and say, 'Let's pass this George Floyd Justice in Policing Act."

A key point that jurors had to weigh in the charges against the Thao, Kueng, and Lane was if the ex-officers acted "willfully." The law under which they were prosecuted required the jury to decide if they intentionally chose to do nothing about use of force they knew was unreasonable, and that they deliberately did nothing to help Floyd when there was a clear medical need.

Defense attorneys for the three former officers argued they did not clearly see or recognize that Chauvin’s knee pressure was causing Floyd to suffocate. Thao had the clearest view of Chauvin’s knee hold, but his defense argued he was more focused on controlling the bystanders on the sidewalk.

Prosecutors argued that if the untrained onlookers could recognize that Floyd needed help, crying out that Floyd was not breathing and pleading to check his pulse, then certainly the trained officers had to know the same.

Kueng was positioned right next to Chauvin, but he testified that while he could see Chauvin’s knee at the base of Floyd’s neck, but could not see it was putting direct pressure on his neck. Attorneys for both Kueng and Lane argued that they trusted that Chauvin, with 19 years experience and a training officer, was making the right decisions, particularly when he said they would keep Floyd "right where he is," rather than turning him on his side. Lane was on his fourth shift, Kueng his third.

Lane is only charged with failing to provide aid, but his defense argued that he did try. Lane called the ambulance after Floyd cut his face during the struggle. Lane also twice asked about rolling Floyd on his side. Chauvin told him no the first time. He did not respond to the second.

Lane also confirmed Floyd was breathing at one point. His defense argued that he had no reason to believe that had changed. Lane later checked for a pulse on Floyd’s ankle, but when he couldn’t find one he said he wasn’t sure it was accurate.  At that point, he could see the ambulance down the street, so waited for their arrival. 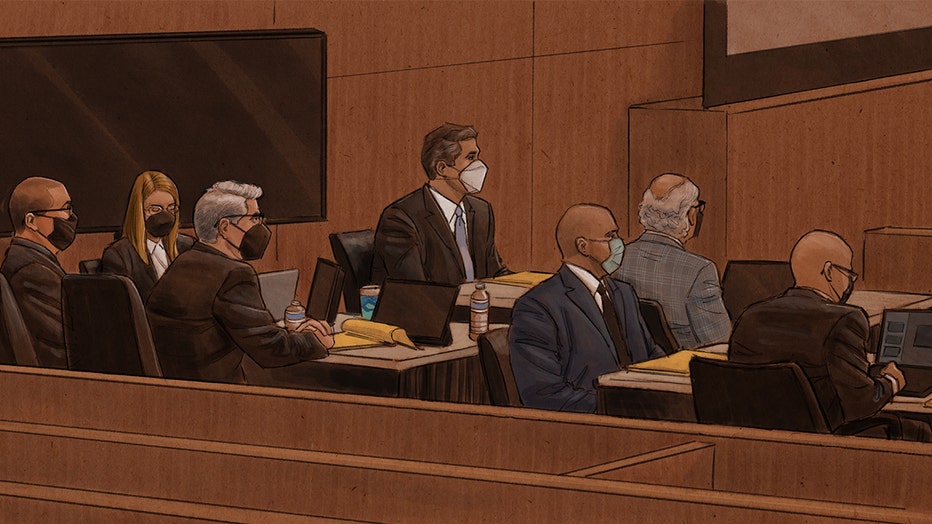 "Today closes another important chapter in our journey for justice for George Floyd and his family. These officers tried to devise any excuse that could let them wash the blood from their hands, but following these verdicts George’s blood will forever stain them. Today’s guilty verdicts should serve as the guiding example of why police departments across America should expand and prioritize instruction on an officer’s duty to intervene and recognize when a fellow officer is using excessive force," the collective statement read.

"My thoughts today are with the family of George Floyd. This verdict honors Floyd’s memory.

"Once again, the principle that no one is above the law and no one is beneath it has been upheld. This is not a celebratory moment, but it is an important one. The jury found that the defendants’ deprivation of George Floyd’s civil rights caused his death. The verdicts today vindicate the principle that officers have a duty and a responsibility to intervene and render medical care, and they affirm that it is a violation of federal law not to do so. I hope that law-enforcement departments all over the country will act to ensure that officers will intervene if they see illegal conduct by a fellow officer. That is an important part of the change that we need. These verdicts will help move us toward it.

"I want to thank Assistant Attorney General Kristen Clarke, head of the Department of Justice Civil Rights Division, Acting U.S. Attorney for the District of Minnesota Charles Kovats, and the prosecutors who tried this case for fearlessly following the path of justice wherever it led. While these verdicts in themselves are not justice, they are accountability, and accountability is a step on the path of justice."

Floyd, 46, died on May 25, 2020 after Chauvin pinned him to the ground outside Cup Foods at the intersection of 38th and Chicago in Minneapolis and pressed his knee on his neck even as Floyd, who was handcuffed, repeatedly cried out that he could not breathe. Two other Minneapolis police officers, J. Alexander Kueng and Thomas Lane, helped restrain Floyd, while a third officer, Tou Thao, held back bystanders and kept them from intervening in the over nine-minute-long restraint.

The death of George Floyd: A timeline of a chaotic, emotional week in Minneapolis

Kueng, Lane and Thao are all charged with aiding and abetting second-degree murder and aiding and abetting second-degree manslaughter for their roles in Floyd’s death. Their state trial will take place in June 2022 after it was delayed to allow a federal case against all four officers, including Chauvin, to go forward. Last spring, a federal grand jury indicted Chauvin, Thao, Kueng and Lane on charges they violated Floyd’s civil rights during his deadly arrest in May 2020.

Floyd’s death sparked conversations about race and policing nationwide. As a result, the Justice Department has launched a sweeping civil investigation into the patterns and practices of the Minneapolis Police Department.