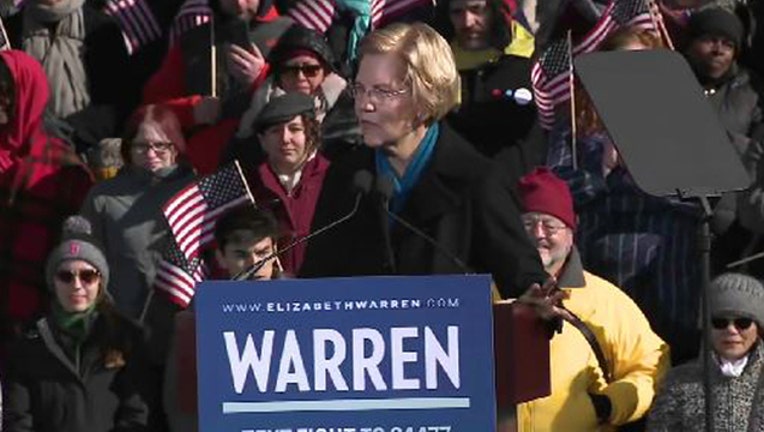 LAWRENCE, Mass. (AP) - Democratic Sen. Elizabeth Warren made her bid for the presidency official on Saturday in this working-class city, grounding her 2020 campaign in a populist call to fight economic inequality and build "an America that works for everyone."

Warren delivered a sharp call for change at her presidential kickoff, decrying a "middle-class squeeze" that has left Americans crunched with "too little accountability for the rich, too little opportunity for everyone else." She and her backers hope that message can distinguish her in a crowded Democratic field and help her move past the controversy surrounding her past claims to Native American heritage.

Weaving specific policy prescriptions into her remarks, from Medicare for All to the elimination of Washington "lobbying as we know it," Warren avoided taking direct jabs at President Donald Trump. She aimed for a broader institutional shift instead, urging supporters to choose "a government that makes different choices, choices that reflect our values."

Trump "is not the cause of what's broken," Warren told an elated crowd without using the president's name. "He's just the latest - and most extreme - symptom of what's gone wrong in America."

Warren announced her campaign in her home state of Massachusetts at a mill site where factory workers went on strike in the early 20th century, a fitting forum for the longtime consumer advocate to advance her platform.

Supporters turned out in below-freezing temperatures, many hoisting signs — "Win With Warren," one read. A Massachusetts bakery created "Persist" cookies for the event to honor the candidate's slogan, "Nevertheless, She Persisted," words first spoken in the Senate to rebuke her.

Warren's rollout rally was a potent motivator for longtime supporters such as Mo Malekafzaly and Carlos Garcia, two longtime backers who attended her rally from Shrewsbury, Massachusetts.

The choice of Lawrence to start her campaign "shows who she's fighting for," Garcia said. Asked if fellow New Englander Sen. Bernie Sanders could pose a serious threat to Warren in New Hampshire's critical primary should he get into the race, Garcia said Warren is "such an effective communicator that I think that people will respond to that very well."

She will hold an event later Saturday in New Hampshire, home to the nation's first primary, and plans to spend Sunday in Iowa, where the leadoff caucuses will be the first test of candidates' viability.

Warren was the first high-profile Democrat to signal interest in running for the White House, forming an exploratory committee on New Year's Eve.

She was endorsed and introduced Saturday by Massachusetts Democrats Sen. Ed Markey and Rep. Joe Kennedy III. Kennedy's backing could prove valuable for Warren, given his status as a rising young Democratic star and his friendship with one of her potential 2020 rivals, former Rep. Beto O'Rourke, D-Texas.

Warren enters the race as one of the party's most recognizable figures. She has spent the past decade in the national spotlight, first emerging as a consumer activist during the financial crisis. She later led the congressional panel that oversaw the 2008 financial industry bailout. After Republicans blocked her from running the Consumer Financial Protection Bureau, an agency she helped create, she ran for the Senate in 2012 and unseated a GOP incumbent.

She has $11 million left over from her commanding 2018 Senate re-election victory that can be used on her presidential run.

Still, Warren must compete against other popular Democrats who will be able to raise substantial money. A recent CNN poll found that fewer Democrats said they'd be very likely to support Warren if she runs than said the same of former Vice President Joe Biden, Sen. Kamala Harris of California and Sanders. Still, about as many Democrats said they'd be at least somewhat likely to support Warren as said the same of Harris or Sanders.

That challenge is on display this weekend as Democratic presidential contenders — or those considering a run — fan out across the crucial early-voting states. New Jersey Sen. Cory Booker is in Iowa, while New York Sen. Kirsten Gillibrand is visiting South Carolina. Another possible presidential rival, Ohio Sen. Sherrod Brown, planned to be in New Hampshire on Saturday, while Sen. Amy Klobuchar is announcing her bid Sunday in her home state of Minnesota.

And Warren's launch comes at a challenging moment for the 69-year-old senator. She's apologized twice over the past two weeks for claiming Native American identity on multiple occasions early in her career. That claim has created fodder for Republicans and could overshadow her campaign.

On Saturday, Trump's re-election campaign manager was quick to respond to her candidacy and called her "a fraud."

Warren got notable backup from Gillibrand, however, who called her Senate colleague "an extraordinary public servant." Speaking to reporters in South Carolina, Gillibrand said Trump's treatment of women, particularly women of color, was "outrageous."

The campaign launch will test whether the controversy is simply a Washington obsession or a substantive threat to her candidacy. Doug Rubin, a Boston-based strategist who advised Warren during her first Senate run in 2012, said in an interview that most voters will respond to "the powerful message she's been talking about," in terms of battling social and economic injustices, rather than the back-and-forth over her personal identity.

Another threat could come from a fellow senator who has yet to announce his own plans for 2020: Sanders. They're both leaders of the Democrats' liberal vanguard, but some Sanders supporters are still upset Warren didn't support him during his 2016 primary run against Hillary Clinton. And as a senator from Vermont who won the New Hampshire primary, he would likely go into the Granite State as an early favorite if he decided to run again.

Despite their similarities, Warren and Sanders have taken somewhat divergent paths in recent months as they prepare for the primary. After proposing an "ultra-millionaire tax" that would hit the wealthiest 75,000 households in America, Warren told Bloomberg News last week that she continues to "believe in capitalism" but wants to see stricter rules to prevent gaming the system — a marked contrast with the self-described democratic socialism of Sanders.