WASHINGTON - The Trump campaign filed lawsuits in Michigan, Pennsylvania and Wisconsin as election officials counted votes in several undecided states that were crucial to the outcome of the presidential election.

Earlier Wednesday, Trump said he'll take the presidential election to the Supreme Court, but it's unclear what he meant in a country in which vote tabulations routinely continue beyond Election Day, and states largely set the rules for when the count has to end.

“We’ll be going to the U.S. Supreme Court — we want all voting to stop,” Trump told supporters at the White House. But the voting is over. It's only counting that is taking place across the nation. No state will count absentee votes that are postmarked after Election Day.

As of Wednesday at 4 p.m. ET, former Vice President Joe Biden led President Donald Trump in electoral votes, with 248 to Trump’s 214, according to FOX News projections.

Here is a look at the lawsuits that have been filed related to the 2020 election since Election Day:

The Trump campaign filed a lawsuit Wednesday to halt the state’s vote count, claiming it did not have proper access to observing the opening of absentee ballots.

According to the Associated Press, the campaign said it is calling for a temporary halt in the counting until it is given “meaningful access” in numerous locations and allowed to review ballots that already have been opened and processed. 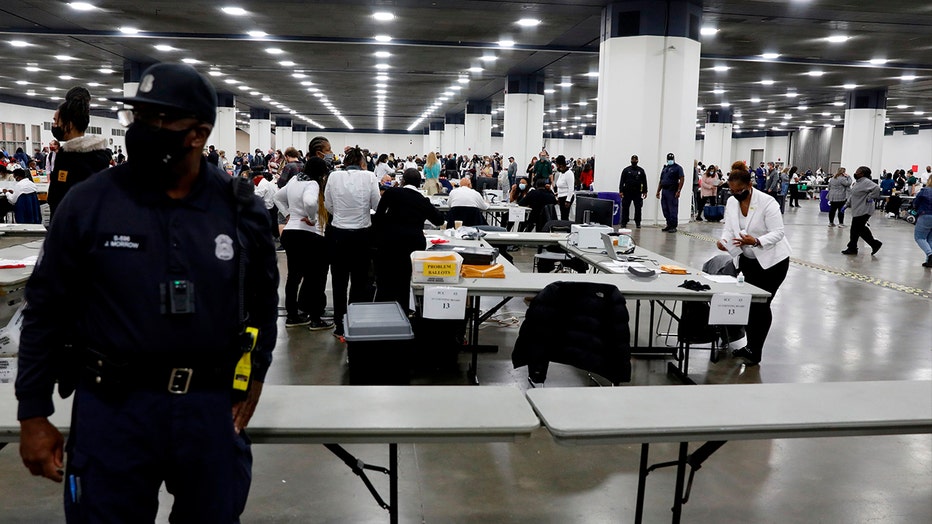 A judge will need to rule on the lawsuit.

According to FOX 2 Detroit, a group of GOP poll watchers tried to enter TCF Center in Detroit where hundreds of thousands of ballots are being counted moments after the suit was filed, but election staff told FOX 2's Jessica Dupnack they are at capacity for both Democrat and Republican watchers.

Mark Brewer, a former state Democratic Party chairman who was observing the Detroit vote counting as a volunteer lawyer, said he had been at the TCF arena all day and had talked with others who had been there the past couple of days. He said Republicans had not been denied access.

“This is the best absentee ballot counting operation that Detroit has ever had. They are counting ballots very efficiently, despite the obstructing tactics of the Republicans,” Brewer said.

"Michigan's elections have been conducted transparently, with access provided for both political parties and the public, and using a robust system of checks and balances to ensure that all ballots are counted fairly and accurately. At this time our department has not been notified by the Court of Claims about this lawsuit and when we are served, we will review it and respond accordingly. Michigan will always continue to protect the rights of all voters to have their ballots counted," Jarvi said.

Meanwhile, Trump's campaign also filed a lawsuit to halt vote counting in the key battleground state of Pennsylvania over a lack of "transparency."

The campaign announced the news Wednesday afternoon, asking the Supreme Court to intervene.

The Secretary of State for Pennsylvania gave updates on where the numbers stand in the election for the state and responded to the possibility of litigation by the Trump administration.

There is a pending Republican appeal at the Supreme Court over whether Pennsylvania can count votes that arrive in the mail from Wednesday to Friday, an extension ordered by the state's top court over the objection of Republicans, according to the Associated Press. That case does not involve ballots already cast and in the possession of election officials, even if they are yet to be counted.

"Bad things are happening in Pennsylvania. Democrats are scheming to disenfranchise and dilute Republican votes. President Trump and his team are fighting to put a stop to it,"  Justin Clark, Trump's deputy campaign manager wrote Wednesday afternoon. "Pennsylvania’s unhinged, radical left Secretary of State Kathy Boockvar has tried her hardest to bake in a backdoor to victory for Joe Biden with late, illegal ballots in collusion with the partisan state supreme court."

On Wednesday, Rudy Giuliani, personal attorney to Trump, said he was "en route" to Philadelphia with the Trump campaign legal team.

Giuliani spoke Wednesday afternoon at a press conference with Eric Trump in Philadelphia, where he accused Democrats of trying to cheat in Pennsylvania.

Stepien said the campaign has “confidence” in the state, and looking at numbers, even with a “conservative estimate,” it believes the president could win by at least 40,000 votes — even if Philadelphia votes for Democratic nominee Biden in large numbers, according to FOX 29 Philadelphia.

But votes were still being tabulated in the state and a winner had not yet been projected.

As Georgia continues to count its ballots, the Trump campaign announced Wednesday night that it had filed a lawsuit in the state, asking to order Georgia election officials to follow the law on storing and counting absentee ballots.

Georgia became a battleground state in the 2020 election, coming into play during the presidential race as demographics, particularly in the metro Atlanta area, have shifted.

State Republican Party Chair David Shafer said in a statement that they planned to sue in a dozen counties.

A woman who answered the phone at the Chatham County Board of Elections offices declined to comment to the Associated Press.

The Georgia Secretary of State said there were still about 185,000 absentee ballots that needed to be counted in the state as of Wednesday evening.

The Trump campaign said it would ask for an immediate recount in Wisconsin, a state which FOX News and The Associated Press called for Biden on Wednesday.

The Wisconsin elections commission gave updates on counting ballots and the integrity of the process.

The Biden campaign reacted to Trump's lawsuits in Wisconsin, citing an example of Trump's margins of victory in 2016.

"When Donald Trump won Wisconsin in 2016 by roughly the same amount of votes that Joe Biden just did, or won Michigan with fewer votes than Joe Biden is winning it now, he bragged about a 'landslide,' and called recount efforts 'sad,'" campaign spokesman Andrew Bates said.

"What makes these charades especially pathetic is that while Trump is demanding recounts in places he has already lost, he's simultaneously engaged in fruitless attempts to halt the counting of votes in other states in which he's on the road to defeat. This is not the behavior of a winning campaign. Plain and simple, Donald Trump has lost Wisconsin, he is losing Michigan, and he is losing the presidency. Put another way, 'It is what it is,'" Bates said.