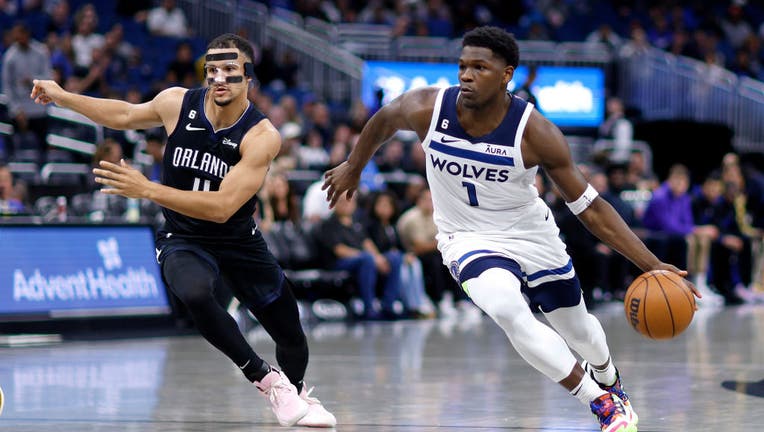 ORLANDO, FLORIDA - NOVEMBER 16: Anthony Edwards #1 of the Minnesota Timberwolves drives on Jalen Suggs #4 of the Orlando Magic during a game at Amway Center on November 16, 2022 in Orlando, Florida. NOTE TO USER: User expressly acknowledges and agree

ORLANDO, Fla. (AP) - Anthony Edwards scored 35 points, Karl-Anthony Towns added 30 and the Minnesota Timberwolves built a 27-point lead in the first half in a 126-108 victory over the Orlando Magic on Wednesday night.

Edwards and Towns had scoring season highs and the Timberwolves shot 52.3% in their biggest victory margin of the season.

Edwards hit three 3-pointers and had a dunk to spot the Timberwolves to a 15-6 lead, and they stretched it to 18 by the end of the first quarter.

Orlando cut a 27-point second-half lead down to nine on a four-point play by Suggs early in the fourth quarter, but D’Angelo Russell scored four points to help Minnesota push its lead back up to 114-97 in the closing minutes.

The Magic played without rookie Paolo Banchero and center Wendell Carter Jr., their two leading rebounders and two of their top three scorers.

Timberwolves: F Taurean Prince was ejected after committing a Flagrant Foul 2 on Suggs as he drove for a layup with 4.9 seconds remaining in the third quarter. ... Chris Finch raised his career coaching record to 69-69.