Police are saying 27-year-old Nicole Jackson has confessed to killing one daughter, then setting their East Point apartment on fire to conceal the crime, leaving her second daughter behind. A neighbor rescued the girl and spoke to FOX 5.

EAST POINT, Ga. - East Point police say a 27-year-old mother has confessed to killing her 4 -year-old daughter, then setting their apartment on fire with the girl's twin inside, in an attempt to cover up the crime the day before Thanksgiving.

The fire was reported at Polaris East Point Apartments, formerly Brookfield Apartments, off Washington Road. The blaze spread to multiple units, forcing residents to evacuate. Officials say they found the body of a 4-year-old girl in an upper apartment.

Resident Ricardo Tolbert says when he saw the flames, he broke the apartment glass to pull this four-year-old out of the fire.

"I pulled the baby out and when the fresh air hit her, her eyes opened, and she wrapped around my neck," the man known as Uncle Top said.

Investigators arrested 27-year-old Nicole Jackson on Thanksgiving Day in connection to the death of one of her children and setting the catastrophic fire at an apartment complex off of Washington Road. Another one of her daughters were rushed to the hospital with injures from the fire.

Fulton County authorities have arrested a mother in connection to a deadly apartment fire the day before Thanksgiving in East Point. Nicole Jackson confessed to killing one child and leaving another child in the apartment after she set the fire on purpose, law enforcement sources tell FOX 5.

"Our suspicion was heightened that foul play was involved due to the acceleration of the fire," Fire Chief Corey Thornton said. "We know the suspect used some type of unknown accelerant, which explains why the fire spread so quickly, causing massive damage, and this forced me to allocate all the resources at my disposal to quickly gather and secure evidence and locate a possible suspect."

East Police fire officials said Jackson used the accelerant to start the fire. But even more troubling, police now say Jackson confessed to killing her 4-year-old before the flames ignited.

"She disclosed to us that the child was already deceased, and she started the fire to conceal a crime," East Point Police Chief Shawn Buchanan explained during a Monday morning news conference.

Police have not revealed how the 4- year-old died. They say an autopsy will reveal that. The surviving child who is now with her grandmother suffered burns to her hands, arms and a portion of her face.

Neighbors say her behavior had grown more bizarre over the last three weeks. Erica Jones lost everything in the fire and lives in the apartment next door.

"I was always hearing rumbling, like someone thrown against the wall, doors slamming windows slamming, and I kept saying something is not right about that girl," resident Erica Jones revealed. 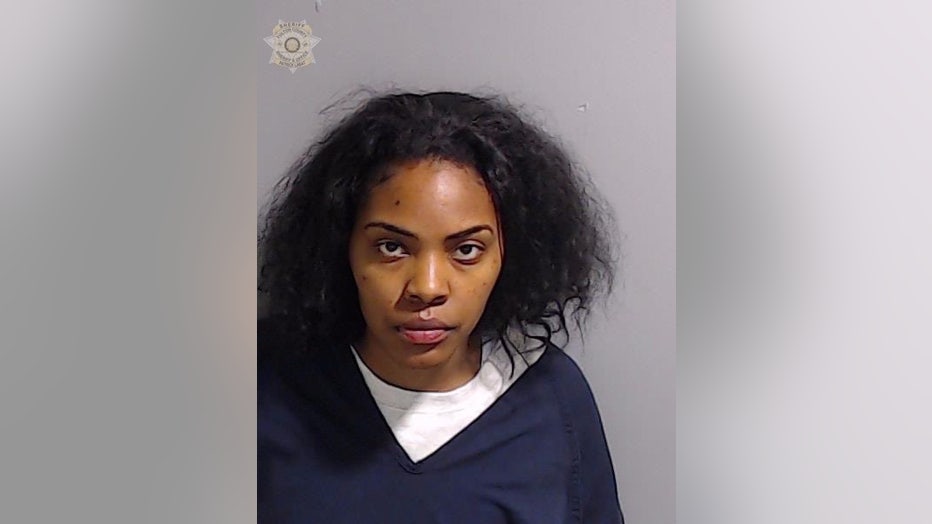 The building had a total of eight units, seven of which were occupied. Officials say the building is a complete loss with the roof having collapsed in during the fire.

MAN RUSHES IN, PULLS BABY TO SAFETY FROM BURNING APARTMENT

The fire left many homeless heading into the holiday season. Several people returned to the complex on Thanksgiving to sift through debris in hopes of finding anything left.

Chief Thornton said his department and the community have felt the heaviness of the incident.

"It has weighed heavily among many, not only those who discovered the deceased, but everyone because we are all connected," he said.

It is not known if Jackson will receive bond.