An Orlando police officer faces an aggravated assault charge stemming from an incident back in July,&nbsp;where the officer allegedly smashed a car window with a board while people were inside the vehicle. FOX&nbsp;35 News spoke to the man driving the car that night, who says he is still dealing with his eye injury from the alleged attack but is also suffering emotionally.

ORLANDO, Fla. - An Orlando police officer faces an aggravated assault charge stemming from an incident back in July, where the officer allegedly smashed a car window with a board while people were inside the vehicle.

Gabriel Pagan has been charged with three counts of aggravated assault with a deadly weapon and one count of criminal mischief. He bonded out of jail on Friday.

FOX 35 News spoke to the man driving the car that night, who says he is still dealing with his eye injury from the alleged attack but is also suffering emotionally. He says this whole encounter has changed his perspective of police and the City of Orlando, and he doesn’t plan on coming back.

“If that top was down on that Mustang, his board would have hit me in my face or my head, and then I think that we would be fighting for justice while I was in a casket,” said James Taylor, who is still struggling four months after he says the officer smashed the windshield of his rental car with a two-by-four beam.

He and his husband were on vacation in Orlando in July, driving to their hotel, when they saw an Orlando police officer on his bicycle pull over near Orange Avenue and Washington Street. Taylor says he slowed down.

“When I went to pull around him, instantly I felt the impact of something hitting the window and glass just shattering.” 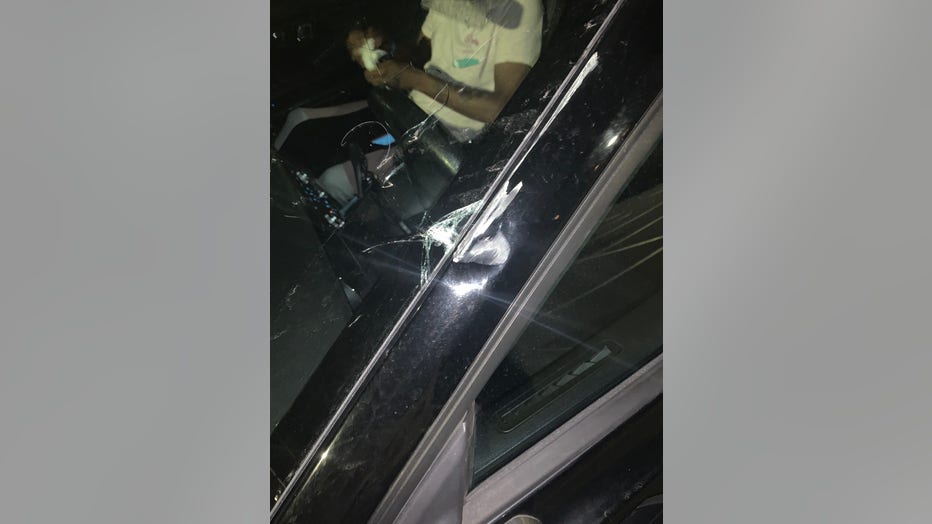 According to records from the Florida Department of Law Enforcement (FDLE), Officer Pagan smashed the beam into Taylor’s rental, resulting in glass flying into Taylor’s eye. Records show Officer Pagan told other officers he used the two-by-four beam to “create distance” between him and the vehicle, which was “reckless” and put him “in fear.”  Taylor says he wasn’t driving aggressively and believes he and his husband were targeted.

“I just felt like if I stopped my car it’s two black gay males. This is going to be a lot worse than what it is today.”

Records show Taylor told investigators he and his husband were listening to Beyonce and wearing pink and “there were several indicators that we were black gay males.”   Taylor said he kept driving out of fear.  However, Orlando Police Chief Orlando Rolon doesn’t believe discrimination played a role.

“Preliminary findings that we have don't indicate or support that allegation. Having said that, regardless though, anything that the victims have expressed or will express is a concern,” Rolon says.

A spokesperson with the Orlando Police Department said the allegation involving Officer Pagan was brought to their attention in July, which prompted an internal investigation. That preliminary investigation was then turned over to FDLE for an outside review for any possible criminal violations. FDLE conducted an investigation and turned its findings over to the State Attorney's Office. The Orlando Police Department and the FDLE did not provide any additional details on the accusation against Pagan.  The State Attorney's Office says there are no other charges pending at this time.

Officer Pagan has been relieved with pay of his law enforcement authority and duties, including his credentials and firearm(s). He became employed with the Orlando Police Department in August 2016.