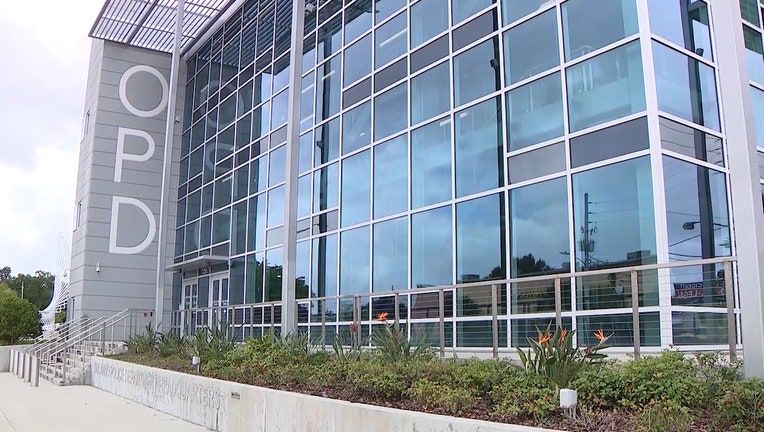 ORLANDO, Fla. - An Orlando police officer who faces an aggravated assault charge stemming from an investigation by the Florida Department of Law Enforcement (FDLE) has bonded out of jail.

Gabriel Pagan has been charged with three counts of aggravated assault with a deadly weapon and one count of criminal mischief. The Ninth District State Attorney's Office confirmed that the charges stem from an incident back in July where Pagan allegedly smashed a car window with a board while people were inside the vehicle.

According to probable cause documents filed by FDLE, one of the victims called 911 and reported that "one of your officers broke my car window... with a stick."

The victim told police "I am driving to my destination. I didn't want to stop because I didn't want your officer just to attack me," according to the documents.

The FDLE documents also reported that investigators later obtained video evidence that shows Officer Pagan take what appeared to be a two-by-four from someone who had been "banging the pole [two-by-four] on everything... and damaging property" at the corner of Washington Street and Orange Avenue.

Other Orlando police officers told investigators that later that evening, Officer Pagan told them that he used the two-by-four to "create distance" between him and the vehicle after it "acted aggressive towards him" and came close to hitting him.

FDLE later interviewed the victim in the case. The victim told FDLE that he and his husband had gone out for the evening Downtown and were on their way back to a hotel nearby when the incident happened. The victim told investigators that they slowed as an officer on a bike in front of them looked back into their rental car "two or three times."

He said the officer pulled to the side, got off his bike, and put the kickstand down. The victim told investigators he came to a "rolling stop" and then proceeded to drive around the officer. The officer did not have emergency lights activated and never indicated that he wanted the victim to stop. The victim said as he passed the officer, his windshield was shattered. He later found glass in his eye.

According to the FDLE documents, the victim told the Orlando Police Department's Internal Affairs investigators that the officer "attack[ed] me and my husband for the color of our skin" and that "the only exchange was the officer looking into the car and identifying two black gay males." The victim said he and his husband were wearing pink and listening to Beyonce and "there were several indicators that we were black gay males."

A spokesperson with the Orlando Police Department said the allegation involving Officer Pagan was brought to their attention in July, which prompted an internal investigation. That preliminary investigation was then turned over to FDLE for an outside review for any possible criminal violations. FDLE conducted an investigation and turned its findings over to the State Attorney's Office. The Orlando Police Department and the FDLE did not provide any additional details on the accusation against Pagan.

The State Attorney's Office says there are no other charges pending at this time.

Officer Pagan has been relieved with pay of his law enforcement authority and duties, including his credentials and firearm(s). He became employed with the Orlando Police Department in August 2016.