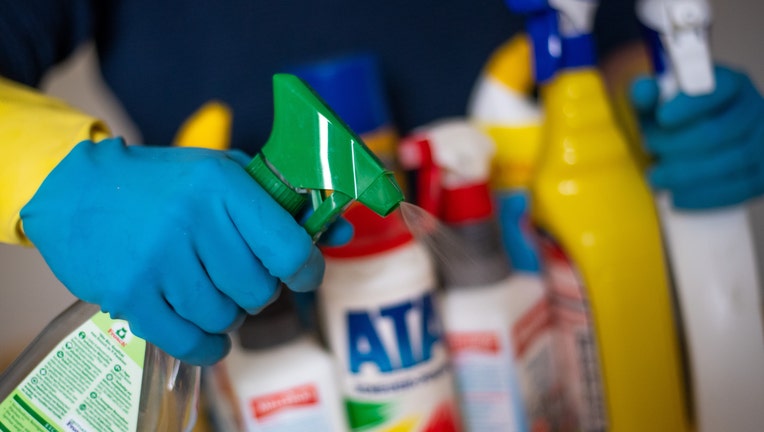 OAKLAND, Calif. - As the novel coronavirus threatens the health and livelihood of people across the country, one group has been hit particularly hard: domestic workers. In an industry made up of mostly women of color - many of whom are undocumented - a majority are out of work, and cannot fall back on unemployment or any other governmental support.

Others who continue to work, but are not protected by state workplace safety laws, face unregulated working conditions where they’re not guaranteed personal protective equipment, may not be able to social distance, and are denied critical safety information about the homes they’re working in.

For many domestic workers, who earn about $12 an hour on average, the decision to work often isn’t much of a decision at all. Either they must keep working, or face untenable financial and housing conditions.

“Since the crisis started, I go to the food banks to be able to feed my family,” Socorro Diaz of Santa Rosa, house cleaner and a leader with ALMAS, the women’s group at the Graton Day Labor Center, said through an interpreter. “With the very little savings that we had, we’re trying to cover our expenses like water and electricity. I, like many other immigrants, don't qualify for any government assistance, including unemployment and what the governor allocated for undocumented families.”

Kimberly Alvarenga, the director of the California Domestic Workers Coalition, described the pandemic’s impact on workers’ lives and livelihoods as “catastrophic.” Overnight, many members not only lost all foreseeable work, but also knew they would have nowhere to turn for economic support.

“They don't have access to a safety net and economic safety net in the same way that many of us do,” Alvarenga said. “They don't have access to unemployment insurance, a lot of the other government programs that exist that are out there right now. And in this current political environment, many of them are extremely fearful to even engage with any governmental agency.”

Anabel, a worker leader with ALMAS and a Bay Area house cleaner, said through an interpreter that although she has lost more than half of her clients, she has no choice but to keep working.

“I have a very difficult situation because my husband is sick -- my husband has cancer -- and I just can't risk losing my home,” she said. “I have to work, and I really worry about that if I lose my home and we end up in a shelter, that I just can't have that happen.”

Diaz said that she has lost almost all her work. With her husband also out of work, and neither of them able to collect unemployment, she is terrified for her family’s future. Her worst fear is to be evicted.

“It's very difficult not having an income right now,” Diaz said. “And our housing situation is also insecure...So we're starting to think ahead a little bit, perhaps sharing our home so that someone can come in and maybe sleep in the living room, and I could share a room with my kids. This could help us pay the back rent that we owe.”

Rosario Mejica of Newark, who works as a caregiver and is a member of Filipino Advocates for Justice, said that her employer has cut back on the amount of days she can work. That’s putting a strain on her being able to budget money for food, rent and sending money to her siblings in the Philippines, who rely on the funds.

“I have to send them at least, because they also cannot go out,” she said. “So, you know, they're still a burden.”

The risk of infection

Mejica said that she often feels distressed by aspects of her work that she cannot control. When she goes to work for an elderly woman she cares for, she takes private transportation, socially distances and wears a mask and gloves, but there are still unknown variables.

“It’s unusual and it's scary, you know?” she said. “Because even if the caregivers are extra careful, there are still some relatives who visit..and you just can’t stop them to get closer to her, you know, things like that.”

Like many domestic workers, Mejica said that she feels overwhelmed and uncertain about the nature of her work right now.

“If I am working full time, I can at least not worry much about financial things,” said Mejica. “But you also have to be careful with our health. If it continues, and who knows, we caregivers might get infected from other people.”

Worrying about her health and her finances is exacerbated by the fact that she doesn’t have health insurance.

Guillermina Castallenos, Co-Director of La Colectiva, the San Francisco Day Labor Program’s women’s collective, said through a translator that she has heard desperate stories from members of the collective who are sick, and can’t afford necessities.

“‘Miss Guillermina, now we're all sick and we don't know what to do,’” she recalled one member telling her, after her husband caught COVID-19 at work, and subsequently passed the virus to his wife and children. “‘We have to be going. We don't have food. We don't have any of the necessities. And my mother in Honduras is 82 years old. I was the breadwinner for her. I was supporting her. What do I do now, that I have not been able to have money to send for her, for her to be able to eat?’”

“This story is very common of workers having to choose between staying home and keeping themselves safe, or going to work because they can't manage anymore being unemployed for months on end,” Diaz said.

Anabel said that her choice to work is motivated by financial necessity, and couched in fear. She seldom has information about the houses she enters to clean.

“It’s a big concern for us,” Anabel said. “Because if we’re going into peoples’ houses to work, we don’t know who is infected, we don’t have access to a lot of information.”

She also said that even though she takes careful precautions to disinfect her cleaning equipment, change her clothes, and wear gloves, it’s still disconcerting to be so unsure about your working conditions.

“Sometimes you do get scared, and you feel that panic of, ‘What am I exposing myself to? What am I exposing my family to?’” Anabel said. “But also there's a very real fear of, if we don't pay rent, what's going to happen then? We'll be in debt, and we'll fall behind in everything.”

Labor leaders and organizers are taking action to materially improve working conditions and policies for workers with SB1257, the Health and Safety for all Workers Act. The Act, which outlines safety standards for employers, would finally extend protections offered by Cal/OSHA to domestic workers.

It would be a significant shift.

Domestic workers are mostly women of color, much more likely to have been born outside of the United States, and earn much less than other workers for hour--even when all demographic factors are controlled.

“They're a lot more likely to be living in poverty,” said Julia Wolfe, an economic analyst at the Economic Policy Institute. “And at the same time, they're a lot less likely to have access to workplace benefits like retirement coverage or health insurance that's provided by their employer.”

Wolfe recently published a paper with colleagues detailing the demographics, wages, benefits and poverty rates of domestic workers in the United States. This data was compiled and analyzed before coronavirus, and it establishes a difficult landscape for workers even before the pandemic.

She said that domestic workers make $12 on average, and that workers in other fields typically make $20 per hour. In San Francisco County, a living wage is $20.82 for an adult with no children, according to MIT’s living wage calculator.

Without structural supports for workplace safety to protect domestic workers, and with many workers who are also nervous about standing up to anyone due to their immigration status, many have been supported by community activist organizations. These same agencies are now organizing on a statewide level to pass SB1257.

Mejica said that when she worked in a care home in Danville, she was abused and also had wages stolen from her. After she and her colleagues contacted Filipino Advocates for Justice, they were able to successfully file a wage theft claim. She also became familiar with her rights as a worker who is not a documented citizen, and became active in the organization. Now, she is advocating for SB1257.

She said that passing SB1257, and being included in Cal/OSHA would be a great relief to her as she continues her career.

“I will feel safer and better,” she said. “If we are abused or whatever, we can go to the OSHA to complain, and they can do something about it to mediate between the employer and us. At least ...we feel secured by then because we know that we are supported.”

Diaz said that advocating for SB1257 is important to her because the protections are vital beyond the coronavirus.

“We constantly enter dangerous situations when we go to work, and that is why I feel it's so important that I am involved in making changes, like promoting our new bill, SB1257,” she said. “We need to increase our health and safety protections at work. And this is not just for the coronavirus. This is for wildfires and other disasters or crises that impact our community.”

A question of equity

Domestic workers interviewed by KTVU all mentioned the emotional toll that job insecurity, health risks and immigration challenges pose during the pandemic.

Diaz said that when 10 of her family members, who live nearby, fell ill with coronavirus within one week, they needed help taking care of themselves, and she felt compelled to assist them, despite the risks.

“My family members are recovering,” she said. “But another thing that's been impacting them, and many other people in the community, is that they are suffering from depression.”

Castallenos said that there are many dualities to the challenges domestic workers currently face in their roles as essential workers, and often as chief breadwinners. She explained that the economic pressure of many domestic workers extends beyond providing for their immediate families.

The anxiety about the virus’ impact on the health and safety of workers’ families is also attached to family members abroad.

“They’re not only worried about their own health and fitness here as well, but their own families in their other countries. Honduras is in a terrible situation,” she said. “Nicaragua, El Salvador, Peru, Ecuador, so many other countries from which these people come are also experiencing this.”

Castallenos said that she and other leaders in the collective have been working double the hours they normally do, from home, to advocate on behalf of workers, organize, and campaign for solutions, including SB1257. She said that members of the collective spent nine hours on a Senate Labor Committee Zoom call last month to give first-hand testimony of the working conditions they’re facing during the pandemic.

“Of course the government knows what our story is, but what we want is them to respond to that piece,” Castallenos said.

“Most domestic workers during those times were African American,”Alvarenga said. “And there were many policymakers that just didn't want to give any of those workers any right to organize, or additional rights. So ever since then, the domestic worker industry has been behind, and really fighting for basic equity.”

Caroline Hart is a reporter with KTVU. She can be reached at caroline.hart@foxtv.com or on Twitter at @Caroline_Hart_