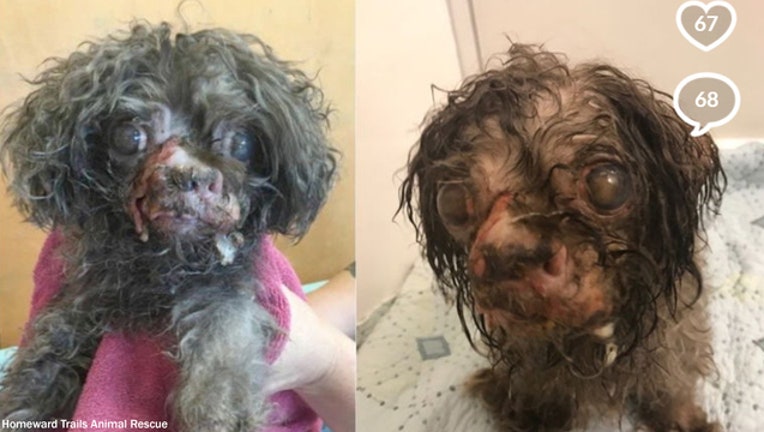 BALTIMORE - A dog that was severely beaten and left in the middle of a Baltimore street on one of the hottest days of the year is now receiving the care he needs.

Homeward Trails Animal Rescue said “Palmier” is receiving treatment from veterinarians for facial injuries, emaciation and blindness after being abused and neglected.

The animal rescue said the poodle and Shih Tzu mix, which appears to be around 4 years old, is expected to survive the ordeal with the help of antibiotics and pain medication.

Homeward Trails Animal Rescue said on a fundraising page for Palmier that "a Good Samaritan put him in the bag and took him to animal control because she didn't have a crate."

Palmier underwent a full body exam and blood work on Friday at an animal clinic and his eyes appear to be improving on the medication he taking. However, the teeth in one side of his mouth are severely infected will eventually need to be removed.

Palmier is currently in foster care with Homeward Trails Animal Rescue but the group said it hopes for him to recover and be adopted to a new, loving family.

To learn how you can donate to help Palmier, click here.