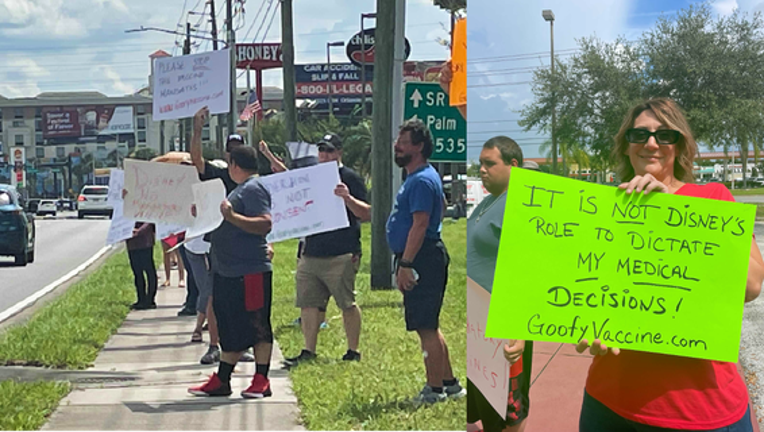 ORLANDO, Fla. - Disney World workers will be joined by firefighters and nurses on Sunday to march against the coronavirus vaccine mandate announced by the Walt Disney Company earlier this summer.

About 30 cast members gathered last week along Apopka Vineland Road to protest against the company mandate.

"I think it’s reasonable for a lot of people to be worried about these mandates and I’m hoping they’ll take a pause and consider what they’re about to do," said Nick Caturano, a Disney Server, who organized the march.

Caturano was a union leader at Local 737 but decided to part ways after they negotiated a deal to have workers fully vaccinated by October 22, or risk losing their jobs.

Another march is planned for Sunday, September 26, at 3 p.m. starting at Manny's Restaurant on Apopka Vineland Road. This time, they'll be joined by first responders.

"After our first march through Disney World last week we heard from Firefighters Unions, Police officers, Healthcare workers, especially nurses who all expressed outrage that their employers are acting like they own the bodies of their employees," " said Caturano in a press release. "We are not their slaves. We have rights, and the most important right is the governance over our own bodies."

There are around 65,000 workers at Disney in Orlando. A similar march is planned for Disneyland workers in Anaheim.