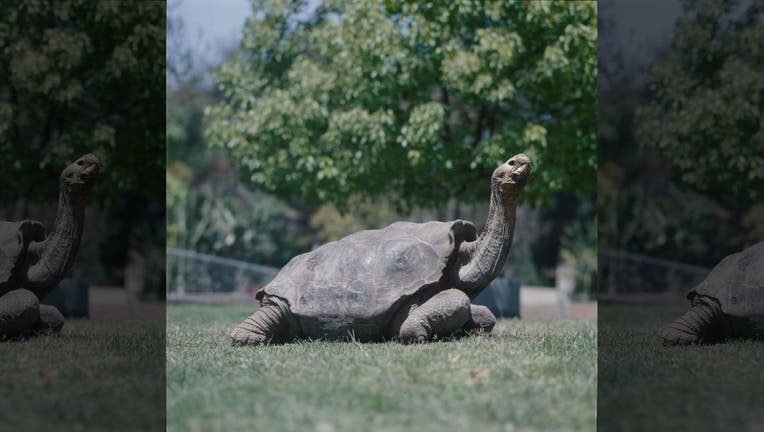 SAN DIEGO - The famed Galapagos giant tortoise named Diego -- estimated at over 100 years old -- fathered 40 percent of all tortoises on Espanola Island in the Galapagos and is officially retiring.

He is credited with saving his species from extinction thanks to his high sex drive, according to a release by the Giant Tortoise Restoration Initiative and translated by the Galapagos Conservancy.

Ecuador's Environmental Ministry made the decision on Friday to end the 40-year captive breeding program for Espanola tortoises, which has helped the population rise from 15 to 2,000, the conservancy said.

The release added that the evaluation conducted by the Galapagos National Park Directorate (GNPD) and Galapagos Conservancy as part of the Giant Tortoise Restoration Initiative (GTRI) concluded that the breeding program demonstrated "the recovery of habitat conditions" and the "populations that it hosts."

The 175 pound Diego is a Chelonoidis hoodensis, a species only found in the wild on the island of Espanola, according to AFP. He reportedly fathered an estimated 800 offspring as of 2016.

He was brought to the U.S. between 1928 and 1933 and placed in a breeding center on the Galapagos island of Santa Cruz, after his species was determined to be critically endangered in the 1960s, according to the San Diego Zoo.

“Based on the results of the last census conducted at the end of 2019 and all the data available since 1960 -- both of the island and its tortoise population ... the conclusion was that the island has sufficient conditions to maintain the tortoise population, which will continue to grow normally -- even without any new repatriation of juveniles," said Washington Tapia, the director of the GTRI.

Tapia had told AFP back in 2016 that Diego was "a very sexually active male," who contributed "enormously to repopulating the island."

The closure of the program means 15 of the breeding adult tortoises -- 12 females and 3 males -- will be allowed to return to their natural habitat, the first time that's happened since the mid-1960s, the release said.

Diego will return to his home island of Espanola in the Galapagos nearly eight decades after being extracted from it. The plan is to release all 15 tortoises back to Espanola, their island of origin in March 2020.