Gov. DeSantis is cracking down on disruptive protesters and anyone who moves to defund the police.

WINTER HAVEN, Fla. - During a press conference with many law enforcement leaders from across Florida, Governor DeSantis proposed a new state law that would combat civil unrest.

The new law would be called the 'Combatting Violence, Disorder, and Looting and Law Enforcement Protection Act' and it will be a focal point of the next legislative session. Governor DeSantis described it as the "boldest and most comprehensive piece of legislation to address these issues anywhere in the country."

The new legislation will enhance penalties for crimes like blocking roadways, taking down statues, and assaulting law enforcement. For example:

During a press conference with many law enforcement leaders from across Florida, Governor DeSantis announced his proposal for a new state law that would combat civil unrest.

The full legislation and all the new penalties it includes are below: 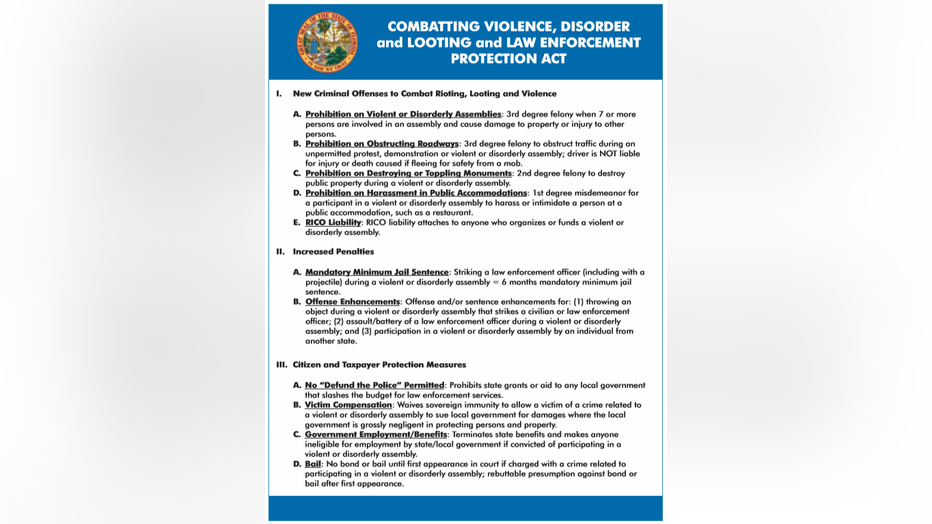 Governor DeSantis also said that any municipality that defunds the police will have state financial support withheld. However, he said that if it appears to be a normal budget cut, then the local government won't lose state funding.

In addition, attempts would be made to identify groups funding or organizing protests as well.

RELATED: Push by feds has led to more than 300 arrests in US protests following death of George Floyd

Those convicted under the new legislation will reportedly not be eligible for state benefits, including unemployment.

"We need to do more in terms of having a strong legislative response so we do not always have to play whack-a-mole anytime you have situations like this develop," the Governor said. "This is a very robust package. I think what we saying is that we’re not going to let Florida go down the road where some of these places have gone." 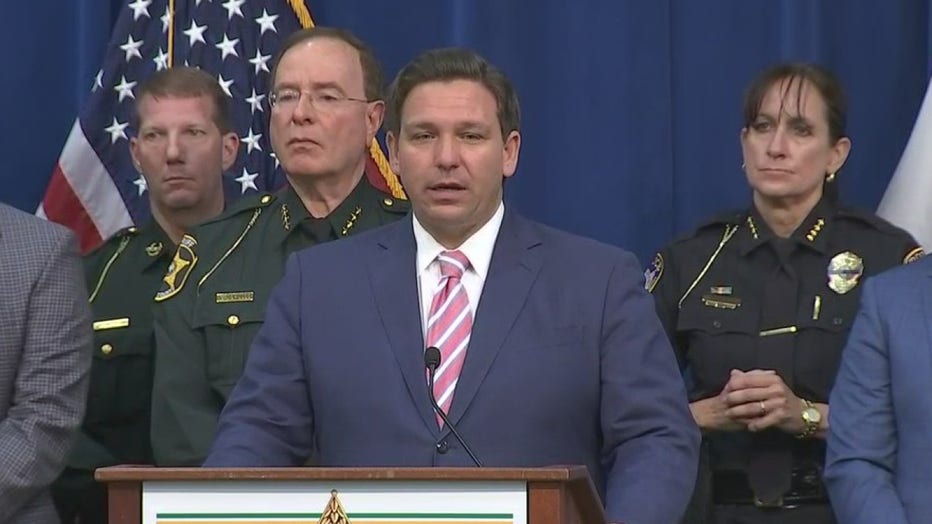 Governor Desantis discussed the ongoing unrest in Portland, stating that "They're all scraggly-looking ANTIFA-types. They get their mugshot taken, then they get released. It's like a carousel; on and on it goes."

He added that "Florida has done a great job in many decades in reducing crimes and we’re going to continue to do that."

Several of the law enforcement leaders in attendance spoke as well.

Senate President-Designate Wilton Simpson spoke as well and said that "we will continue to stand with our brave law enforcement officers as they protect and serve. This bill is a way to ensure that all Floridians can live in a safe and secure environment. I commend Governor DeSantis for his commitment to public safety.”

“Violence and destruction are the tools of terrorists, not reformers,” said House Speaker-Designate Chris Sprowls. “We live in a country founded on the power of words, and no group of self-appointed activists and anarchists can be allowed to deprive others of their life, liberty or property. I’m proud to stand with Governor DeSantis to say that in Florida we will respect the right of people to protest peacefully while defending the rule of law.”

Florida Police Chiefs Association President and Satellite Beach Police Department Chief Jeff Pearson added that "on behalf of the Florida Police Chiefs Association and over 900 of Florida's top law enforcement executives from across every region of the state, we thank Governor DeSantis for his strong leadership and dedication to maintaining public order and keeping the peace."

The law proposed by Governor DeSantis will be introduced in the next legislative session.