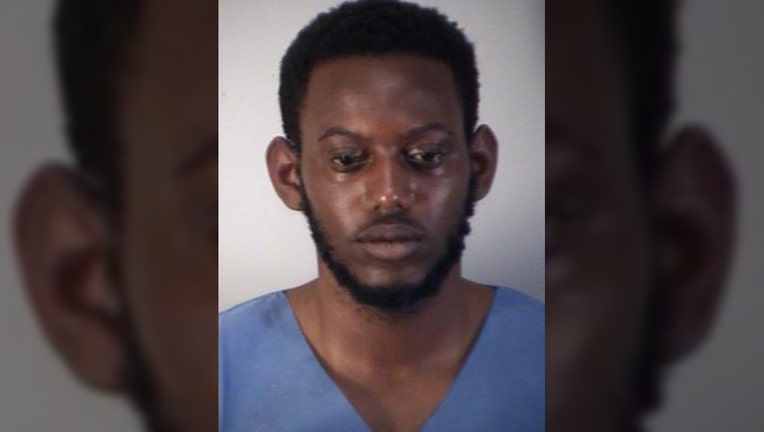 MOUNT DORA, Fla. - A man who was being held at gunpoint after breaking into a Florida home began to strip until law enforcement arrived and arrested him, deputies said.

According to the Lake County Sheriff's Office, deputies responded to a burglary just after 3 a.m. in Mount Dora on Friday.

They said that the 911 caller told deputies that a man had broken into the residence and that her husband was holding him at gunpoint. The suspect also reportedly began to undress at some point and shots were fired.

Upon arrival, deputies said that they found the man, identified as 24-year-old Deron Randall, standing in the living room naked and being held at gunpoint. Several K-9 warnings were given but Randall refused, so a K-9 was deployed to apprehend the man. He was also tased and then deputies tried to handcuff him, but Randall was able to slip a handcuff off. He reportedly continued to struggle with the deputies. So, the K-9 was deployed again, biting him multiple times. He was tased again as well but it had little effect on the man. Eventually, deputies said that they were able to restrain and arrest him.

During their investigation, the Sheriff's Office learned that the woman at the residence was followed by Randall on social media. Police said that she claimed that at some point, he began to make inappropriate comments towards her, causing her to block him on social media. After some time passed, her family had a stove delivered to her home from Lowes. During this, she realized that the delivery worker was Randall.

It was on the morning of January 9, 2020, that Randall allegedly robbed the woman's home, deputies said. He returned again on Friday and that is when he was held at gunpoint. He reportedly broke the home's rear sliding glass door to get in and was confronted with a shotgun. A struggle ensued and the shotgun was fired. The man in the house was able to retrieve another weapon, a pistol, and held Randall at gunpoint until law enforcement arrived. However, while waiting for their arrival, Randall reportedly began to undress and stood nude in the living room.

Randall was taken to the hospital with multiple injuries, deputies said. Afterward, he was transported to the Lake County Jail.