President-elect Joe Biden expressed sympathy to the family of a Capitol Police officer who died in the violent riot of the U.S. Capitol by Trump supporters and called on the Senate to quickly confirm his Cabinet.

WASHINGTON - A key Senate committee on Thursday approved the nomination of New Mexico Rep. Deb Haaland to be interior secretary, clearing the way for a Senate vote that is likely to make her the first Native American to lead a Cabinet agency. 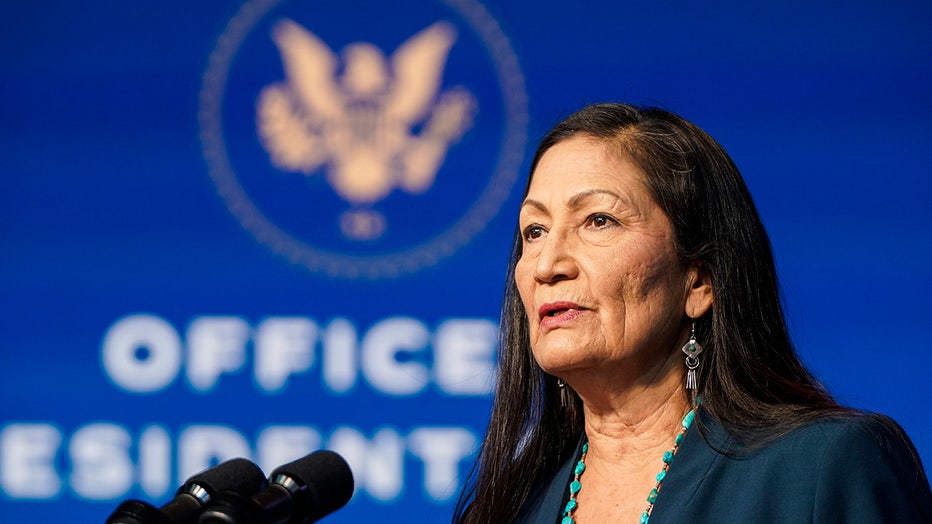 Rep. Deb Haaland, speaks after President-elect Joe Biden announced his climate and energy appointments at the Queen theater on December 19, 2020 in Wilmington, Delaware. Haaland is the first Native American nominated to serve on the presidential cabi

Murkowski, a former chair of the committee, said she had "some real misgivings" about Haaland, because of her support for policies that Murkowski said could impede Alaska's reliance on oil and other fossil fuels. But the senator said she would place her "trust" in Haaland's word that she would work with her and other Alaskans to support the state.

Her vote comes with a warning, Murkowski added: She expects Haaland "will be true to her word" to help Alaska. Haaland was not in the committee room, but Murkowski addressed her directly, saying, "I will hold you to your commitments.''

"Quite honestly,'' Murkowski added, "we need you to be a success.''

Democratic Sens. Martin Heinrich of New Mexico and Maria Cantwell of Washington state both called the committee vote historic, and both said they were disappointed at the anti-Haaland rhetoric used by several Republicans. Wyoming Sen. John Barrasso, the panel's top Republican, and other GOP senators have repeatedly called Haaland's views "radical" and extreme.

Heinrich said two interior secretaries nominated by former President Donald Trump could be called "radical" for their support of expanded drilling and other resource extraction, but he never used that word to describe them. Under the leadership of Cantwell and Murkowski, the energy panel has been bipartisan and productive in recent years, Heinrich said, adding that he hopes that tradition continues.

The committee vote follows an announcement Wednesday by Sen. Susan Collins, R-Maine, that she will support Haaland in the full Senate. Her vote, along with Murkowski's, makes Haaland’s confirmation by the Senate nearly certain.

The panel's chairman, Sen. Joe Manchin, announced his support for Haaland last week. Manchin, a moderate Democrat from West Virginia, said Thursday that he does not agree with Haaland on a variety of issues, including the Keystone XL oil pipeline, but was impressed by the strong endorsement by Alaska Rep. Don Young, a conservative Republican who is the longest-serving member of the House and has forged a strong working relationship with the liberal Haaland.

As a former governor, Manchin also said he knows how important it is for a president to have his "team on board" in the Cabinet.

"It is long past time to give a Native American woman a seat at the Cabinet table,'' he said. Interior oversees the nation’s public lands and waters and leads relations with nearly 600 federally recognized tribes.

Barrasso, who has led opposition to Haaland, said her hostility to fracking, the Keystone XL oil pipeline and other issues made her unfit to serve in a position in which she will oversee energy development on vast swaths of federal lands, mostly in the West, as well as offshore drilling in the Gulf of Mexico and Alaska.

Barrasso said a moratorium imposed by Biden on oil and gas leases on federal lands "is taking a sledgehammer to Western states’ economies.″ The moratorium, which Haaland supports, could cost thousands of jobs in West, Barrasso said.