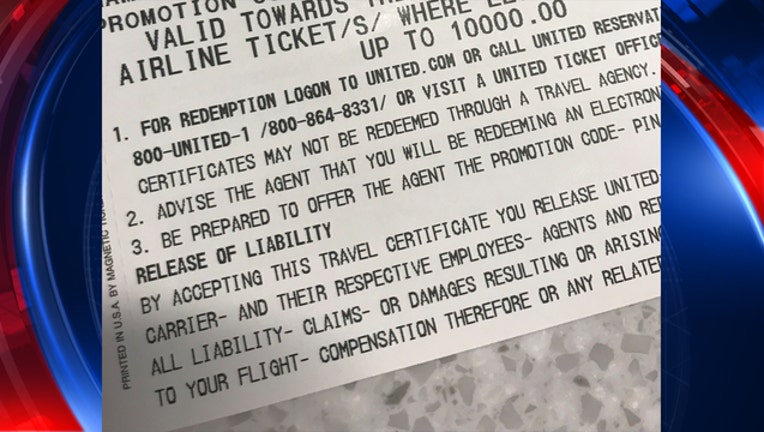 A passenger who was bumped off a full flight has scored the maximum prize — a $10,000 travel voucher.

A spokesman for United Airlines confirmed Friday that a passenger got the big voucher "per our company policy." He declined to name the person.

In a series of tweets, Allison Preiss of Washington, D.C., described how she was rewarded after being asked to give up her seat on a Thursday flight.

Preiss told The Associated Press she was waiting to board a flight from Dulles Airport outside Washington to Austin, Texas, for a bachelorette party. A broken seat meant the airline had one too many passengers.

Agents announced in the gate area that the flight was oversold, and they offered $800 vouchers, then raised it to $1,000 in travel credit, Preiss said.

"Since nobody volunteered, they then announced that the lowest-fare passenger would be pulled out of the boarding line," Preiss said.

The agents raised the offer for volunteers one more time, to a $2,000 voucher, but when no one responded, Preiss was stopped from boarding the plane.

In her tweets, Preiss said that a United employee offered her $2,000 in travel credit but she wanted cash. Then an agent offered a $10,000 voucher.

"They really do not want to give me cash. They just offered me $10,000 in travel credit. TEN THOUSAND," she tweeted.

She took it. Along with two $10 meal vouchers. United drew the line, however, at letting Preiss into one of its airport lounges, she said.

Preiss said she paid $163 for her one-way ticket, not counting taxes and fees.

Asked what she will do with the voucher, Preiss, who manages communications for a liberal advocacy group, told the AP, "Haven't decided yet but I'm thinking Hawaii."

United raised the amount airport employees could pay a bumped passenger to $10,000 last year after criticism over the violent dragging of a man off a full flight in Chicago.

Some experts doubted that United or Delta, which raised its maximum compensation for bumping passengers to $9,950, would ever pay out the maximum. United did not immediately say if any other passengers have received a $10,000 voucher.