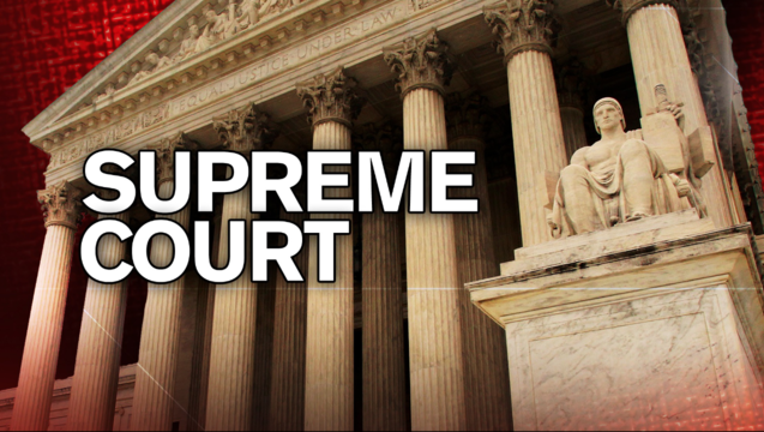 WASHINGTON (AP) - The Supreme Court on Monday upheld the broad reach of a federal law that bars people with misdemeanor domestic violence convictions from owning guns.

The justices rejected arguments that the law covers only intentional or knowing acts of abuse and not those committed recklessly — where a person is aware of the risk that an act will cause injury, but not certain it will. As examples, the court mentioned throwing a plate in the heat of an argument, or slamming a door.

The case involved two Maine men who said their guilty pleas for hitting their partners should not disqualify them from gun ownership.

Writing for herself and five other justices, Justice Elena Kagan said that Congress enacted the gun law some 20 years ago to close a loophole and "prohibit domestic abusers convicted under run-of-the-mill misdemeanor assault and battery laws from possessing guns." She said if the law were read to exclude misdemeanors in which a person acted recklessly, it would "substantially undermine the provision's design."

Gun-rights groups had argued that Stephen Voisine and William Armstrong III should not lose their constitutional right to bear arms, while advocates for victims of domestic abuse pushed to preserve the restriction.

The case isn't among the more important ones of the term. White House spokesman Eric Schultz said while the Obama administration is pleased with the ruling, he suggested it wouldn't have a significant impact on the debate in Congress about gun control, a debate renewed by a mass shooting earlier this month that left 49 people dead at a gay nightclub in Florida.

The case is notable, however, in part because when it was argued on Feb. 29 Justice Clarence Thomas asked a series of questions from the bench, the first time in 10 years that he'd asked a question. His questions came less than a month after the death of Justice Antonin Scalia, his close friend, conservative ally and also a strong supporter of gun rights.

Thomas expressed concern at the argument that a misdemeanor conviction could deprive someone of their constitutional gun rights, pressing a government attorney for any other examples when that could happen. He returned to that issue in a dissenting opinion Monday.

"Under the majority's reading, a single conviction under a state assault statute for recklessly causing an injury to a family member — such as by texting while driving — can now trigger a lifetime ban on gun ownership," he wrote, adding: "We treat no other constitutional right so cavalierly."

Justice Sonia Sotomayor joined Thomas' dissent in part, agreeing that if Congress wanted to cover all reckless conduct it could have written the law differently.

The two men who were the subjects of Monday's decision were convicted of breaking federal law by possessing firearms following misdemeanor convictions for domestic violence. Both men argued that they should not be barred from gun ownership because their convictions could have been based on reckless action, not action that was knowing or intentional.

Voisine pleaded guilty to assault in 2004 after slapping his girlfriend in the face while he was intoxicated. Several years later, an anonymous caller reported that he had shot a bald eagle with a rifle. He was then convicted under the gun law and sentenced to a year in prison.

Armstrong pleaded guilty to assaulting his wife in 2008. A few years later, police searching his home as part of a narcotics investigation discovered firearms and ammunition. He was sentenced to three years of probation.