The Florida Department of Law Enforcement and other agencies announced the arrest of Brian and Chrystal Washburn.

MELBOURNE, Fla. - You can see the exposed rebar and bare concrete that Amore Pools left at one Brevard County family's home, according to authorities, and they're far from the only ones.

Keith Hodge showed us around the empty, half-finished swimming pool behind his house. He also showed us pictures of what it looked like before the work got done, and what they left behind.

"We were looking to get a hot tub installed, get a resurface, and replace our tile with new glass tiles to match the tiles that were to go in the hot tub," he said.

Hodge says Amore Pools’ owners, Brian and Chrystal Washburn, told them they could do it in eight weeks for $28,000. Instead, he said Amore was running a scam, and it will now cost $45,000 to get another contractor to do the job right.

"I feel like I was used by Amore," he said, "and victimized." 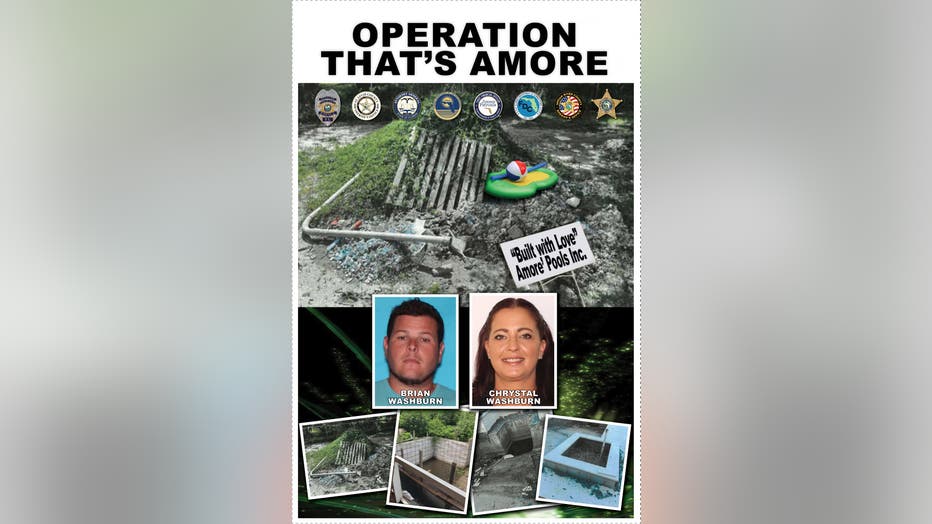 The Florida Department of Law Enforcement (FDLE) and other agencies announced the arrest of Brian and Chrystal Washburn. It said the pair defrauded customers across several Florida counties out of more than $2 million.

"They never had a desire to build a small business, their only goal was fraud," said FDLE Special Agent Lee Massie. "The Amore Pools Inc. was the vehicle they used to steal millions from more than a hundred homeowners."

FDLE agents showed photos of the mess they said Amore Pools left at other homes where they pledged to build pools. They said agents worked quickly to build their case against these scammers.

"They all knew that failure to take these individuals off the streets would result in more victims," Massie said.

The Hodges said they hope their new contractor will finally be able to get this work done sometime this December.

The Washburns are facing charges related to fraud, working without the proper licenses, and money laundering.

Hodge said he just hopes this shuts them down for good. "It's gonna save a lot of other customers from going through the same thing that we did."