NEW YORK - If the United States had implemented social distancing guidelines and other measures just one week earlier, tens of thousands of lives could have been saved in the coronavirus pandemic, according to a new model on the virus’s spread by Columbia University.

The first confirmed U.S. case of COVID-19 was reported at the end of January, but it wasn’t until mid-March that the White House urged all older Americans to stay home and everyone to avoid gathering in groups of 10 or more. New York City’s public school system also announced it would close during that time.

The new projections from researchers at Columbia show that if the country had shut down one week earlier than it did, nearly 36,000 fewer people would have died from the outbreak nationwide — about 55% of the deaths that were recorded through May 3.

If the U.S. had implemented lockdown measures and social distancing on March 1, two weeks earlier than most started staying home, 83% of deaths could have been avoided, researchers estimated.

"A longer response time results in a stronger rebound of infections and death," the researchers wrote in the report. "Our findings underscore the importance of early intervention and aggressive response in controlling the COVID-19 pandemic."

Out of 1.5 million reported cases in the U.S., more than 93,000 people had died as of May 21, according to data from the Johns Hopkins Coronavirus Resource Center.

And deaths caused by the novel coronavirus are believed to be undercounted in the U.S. and abroad, due in large part to limits in testing and the different ways countries count the dead. 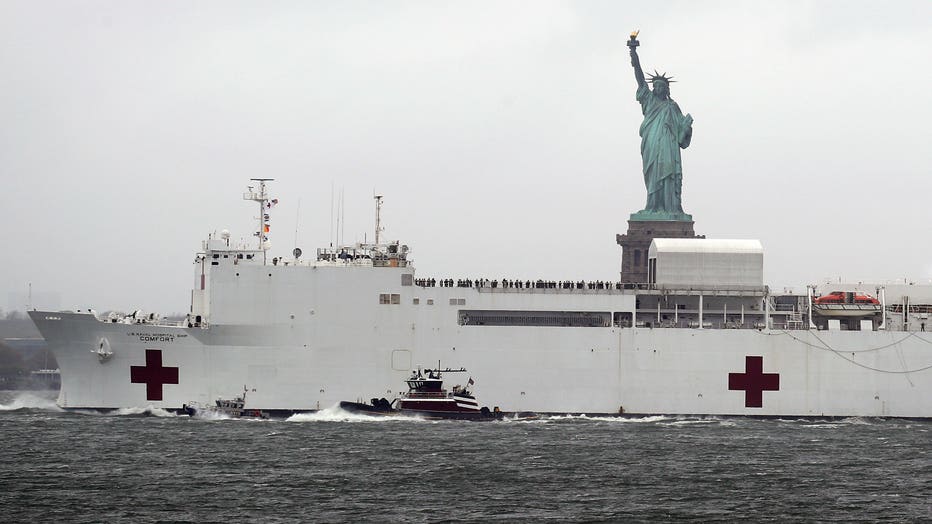 The USNS Comfort hospital ship exits the harbor in front of the Statue of Liberty as it heads back to Naval Station Norfolk in Virginia on April 30, 2020. The Comfort's 1,000 beds and 12 operation rooms were deployed to ease pressure on New York hosp

The results were published in the pre-print server MedRxiv and are currently under peer-review for publication.

The researchers admitted that implementing these interventions earlier is "complicated by factors such as general uncertainty, economic concerns, logistics and the administrative decision process."

A week later, the administration released a series of sweeping guidelines aimed at stalling the expected surge in coronavirus cases — urging the public to avoid crowds, stating that schooling should be at home and discretionary travel and social visits should be avoided.

In the report, researchers also noted that public compliance with social distancing rules may have lagged due to less people being aware of the infection risk in the beginning.

Still, the findings illustrate the importance of timing in containing the growth of the virus.

"During the initial growth of a pandemic, infections increase exponentially. As a consequence, early intervention and fast response are critical for limiting morbidity and mortality," the researchers wrote.