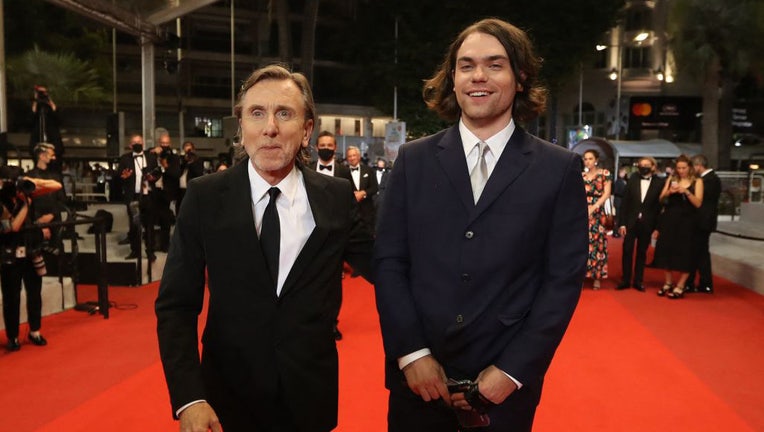 British actor Tim Roth arrives with his son Cormac Roth for the screening of the film "Bergman Island" at the 74th edition of the Cannes Film Festival in Cannes, southern France, on July 11, 2021. (VALERY HACHE/AFP via Getty Images)

LOS ANGELES - Cormac Roth, a musician and son of actor Tim Roth, has died at 25 after a battle with cancer, the family announced Monday.

Roth "died peacefully in the arms of his family who loved and adored him" on Oct. 16, the family said in a statement, adding that "he maintained his wicked wit and humor" to the end.

"The grief comes in waves, as do the tears and laughter, when we think of that beautiful boy across the 25 years and 10 months that we knew him," the family said. "An irrepressible and joyful and wild and wonderful child. Only recently a man. We love him. We will carry him with us wherever we go."

A graduate of Bennington College, Roth was a guitarist, composer and producer. He revealed on his Instagram account that he had been diagnosed with stage 3 germ cell cancer in November 2021.

"It has taken away half of my hearing, 60 pounds of weight, my confidence, and will continue its murderous path until I can manage to stop it some how, and kill it," he wrote. "But it hasn’t taken away my will to survive, or my love of making music. It hasn’t taken me down yet."

He urged everyone to see their doctors.

His father is the star of such films as "Reservoir Dogs," "Pulp Fiction" and "The Incredible Hulk."

Cormac Roth is survived by his parents, Tim and Nikki Roth, and his brother, Hunter Roth.