Corgi reunited with owners after falling overboard into Indian River

A corgi named Jessica is back home with her owners after a scary visit to Florida. She was visiting from landlocked Utah when she fell overboard into the Indian River.

ORLANDO, Fla. - "Jessica," the one-year-old corgi is back with her dad after landing in a literal sink of swim situation.

"Not knowing whether or not she could swim I thought maybe she would panic, being so freaked out trying to figure out how to swim that she’d drown," Jon Atwood told FOX 35 News.

He and his pup had flown to Florida from their home in Utah to help Jon’s mom and step-dad get their motor yacht from Fort Pierce to North Carolina.  They were somewhere between Merritt Island and Rockledge when suddenly Jessica was missing.

"We’d been underway for 6 hours when she went overboard," Jon said.  "She’d never been on the boat before, she’d never been in the water before.  She seemed very intrigued by it. Checking everything out," Jon added, but explained Jessica never leaves his side.

Around 4 o’clock Sunday afternoon, Jon snapped a picture of Jessica sitting on his lap up on the fly bridge.  Moments later as he took some video of dolphins dancing in the boat’s wake, he realized his four legged shadow wasn’t next to him.

"At that point I started panicking and checking the boat out.  They threw the boat in neutral.   We canvassed the boat and immediately put small boats in the water and started to look," Jon said.

He and his family searched for Jessica until after dark.  Jon says he called Florida Fish & Wildlife, the Brevard County Sheriffs Office then posted about his missing pup on every local social media site he could find.  When the sun came up Monday morning, he started searching again. 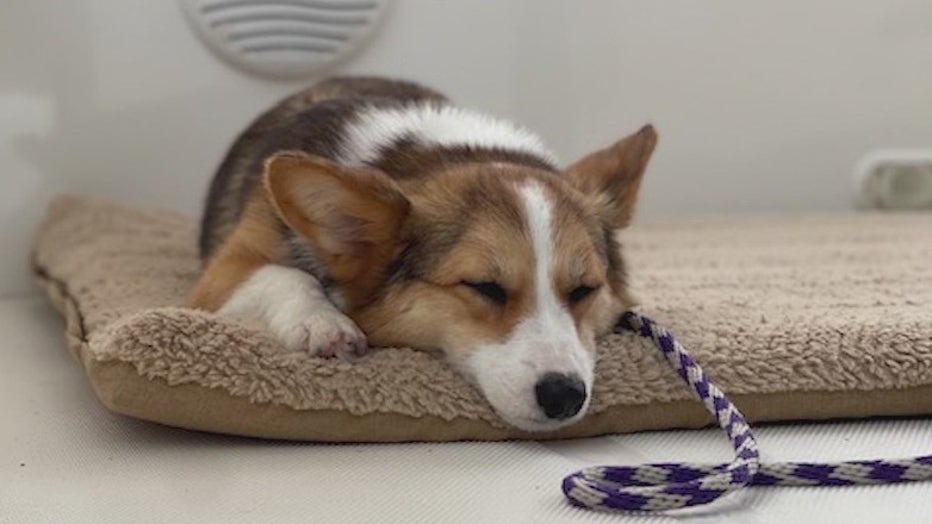 "I was in the tender and hauling butt south. I was going down just outside the channel obviously, because she would have drifted to the west," Jon explained.

What Jon didn’t know, Jessica made it to shore sometime late Sunday afternoon. The man who found her didn’t want to go on camera.  His family along the inter-coastal in Rockledge.  He tells FOX 35 News he was helping his grandfather do some work when a soaking wet, tired, scared pup approached.  He had no idea where she had come from.  He took her home, fed her and bathed her.  Monday he came across a post about corgi going overboard somewhere in his area who was missing.

"He immediately texted me a picture of her and offered to bring her to me. It was very emotional.  As soon as I saw the picture, I knew it was her," Jon said.

Twenty-six hours after Jessica went overboard, she and Jon were re-united around 6 p.m. on Monday. Jessica couldn’t hide her excitement to see her dad.

"She was so excited she peed all over me," Jon said.  He says he took Jessica to a nearby emergency vet to get checked out and the doctor said she’s fine.  When Jon got Jessica back to the boat he put her GPS collar back on her, and he’s been keeping her leashed on the boat.