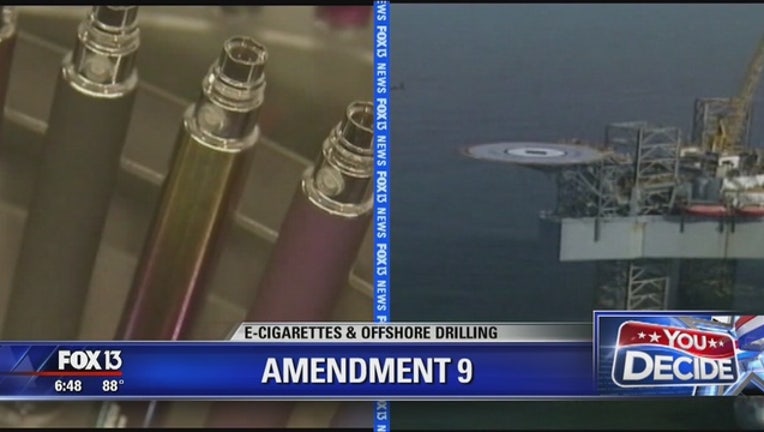 TALLAHASSEE (NSF) - A move to expand the state’s 16-year ban on smoking in indoor workplaces to include electronic cigarettes and vaping is drawing opposition.

But unlike in 2002 when the smoking ban passed, the opposition is not coming from a campaign by Florida restaurants to kill the proposal.

Instead, the measure is facing criticism, including from some newspaper editorial boards, because of the process used by the 37-member Florida Constitution Revision Commission to put what is known as Amendment 9 on the Nov. 6 ballot.

Rather than allowing the vaping ban to stand on its own as a proposed constitutional amendment, the commission coupled it with a proposed ban on offshore oil drilling in Florida waters, describing the combination as an environmental amendment.

The Florida Supreme Court said the commission followed the rules, but the decision to combine the proposals might turn at least some voters against what otherwise could be popular ideas.

Constitution Revision Commission member Lisa Carlton, a key supporter of Amendment 9, is asking voters to reflect before possibly voting against the measure because of the process.

“For this election, look at all the amendments on the ballot. Study them and decide, based on substance, whether they fit into what you think Florida should look like for the next generation,” said Carlton, a former state lawmaker who was the commission’s primary sponsor of the proposed vaping ban and a co-sponsor of the oil drilling ban.

Carlton steadfastly defends the process and said the two issues were rolled into an amendment that addresses the environment.

She also noted that the Supreme Court sided with the commission and against opponents who tried to remove Amendment 9 and other amendments from the ballot because the proposals combined different issues. A lawsuit filed by former Supreme Court Justice Harry Lee Anstead and another plaintiff unsuccessfully argued that including various subjects in single ballot measures ---- a practice known as “logrolling” --- violated the First Amendment, but the Supreme Court rejected the lawsuit.

Retired University of South Florida political-science professor Susan MacManus said, however, that of all the amendments, voters are most perplexed about the coupling of the issues in Amendment 9.

“It makes no sense to the average voter why they were put together,” MacManus told The News Service of Florida in an interview. “Yet the people who wrote it said it was logical.”

Questions about process aside, Amendment 9 --- and other amendments on the ballot --- could face an uphill battle, McManus said, because of voters skipping items at the bottom of the ballot. In all, voters will face decisions on 12 proposed constitutional amendments, which were placed on the ballot by the Constitution Revision Commission, the Legislature and through petition drives.

The amendments appear on the ballot behind several high-profile races, including races for governor and U.S. senator. McManus said that in past elections, voter “roll-off” --- skipping items at the bottom of the ballot --- has been as high as 15 percent, but it could be as high as 25 percent this year.

Constitutional amendments must receive 60 percent support from voters to pass.

Amendment 9, in part, would expand a 2002 constitutional amendment that overwhelmingly passed to ban smoking in most workplaces, including restaurants.

In addition to drawing a legal challenge, the way Amendment 9 was put together has drawn opposition such as in a Tampa Bay Times editorial that encouraged readers to vote against the proposal. That move caught Carlton’s ire, leading her to write a letter to the Tampa Bay Times and other media outlets, including The News Service of Florida.

Carlton said the editorial “shocked” her.

“I was completely shocked that a newspaper --- which from the news side and the editorial side that has written so much about offshore oil drilling and how horrible it is for our environment and our state and our tourist economy and our sea life --- would not look at this as an opportunity for Floridians to make a strong statement to the rest of the country on our thoughts on offshore oil drilling,” Carlton said.

But David Mica, executive director of the Florida Petroleum Council, said he’s not surprised the amendment has drawn criticism.

“It’s not rocket science these are two topics that are totally unrelated,” said Mica, whose group opposes the amendment and maintains that a current state law about drilling in state waters is sufficient. “This issue is the poster child with what was wrong with the bundling that was done. The court said it was legal, but it doesn’t make it right.”

The American Lung Association issued a statement last week supporting Amendment 9, with Chief Mission Officer Deb Brown saying the amendment “will protect Floridians from the dangers of e-cigarette aerosols in our state’s workplaces and public places where smoking is already prohibited.”

And while the restaurant industry lobbied against the 2002 smoking ban, the Florida Restaurant and Lodging Association is supporting Amendment 9.

Samantha Padgett, general counsel for the Florida Restaurant and Lodging Association, said the group thinks the ban on electronic cigarettes and vaping in workplaces should be added to the Constitution for consistency.

“That ship has sailed,” she said of the original opposition to the workplace smoking ban, adding “this is how they regulate now.”