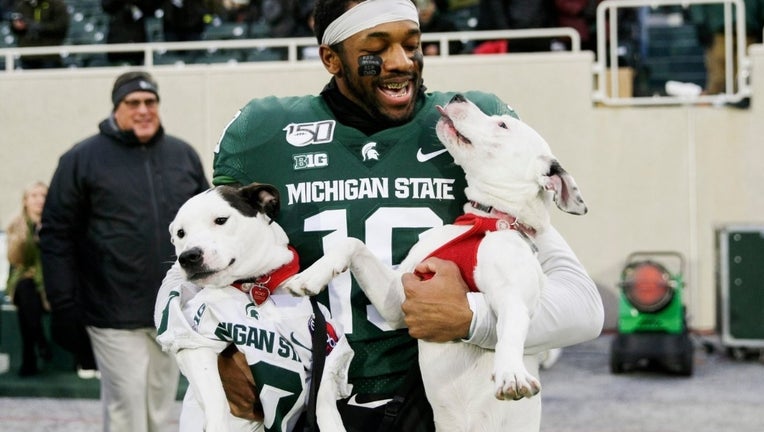 He may not have had his parents with him, but Michigan State football star Josh Butler had plenty of support during Senior Day thanks to his beloved dogs, Roxy and Remi.

Butler lost both of his parents within the past two years.

On Dec. 1, Butler celebrated the university's senior night. It's a tradition for seniors football players to come out from the tunnel of the stadium for their final game of their collegiate career. While many had their parents present, Butler happily brought out other family members, Roxy and Remi, on to the field of Spartan Stadium to celebrate the moment with him.

In 2017, Butler's father died of an apparent heart attack on the day his team was to face-off against Penn State. The Detroit Free Press reports that his coaches told him that playing that day was entirely up to him.

“I was real close to my dad. He helped me become a better man,” Butler told the Detroit Free Press earlier this year. “I already knew he would’ve wanted me to play in that game.”

His team went on to win 27-24 and dedicated the game to his late father.  In April 2019, tragedy struck again: Butler lost his mother to Stage 4 breast cancer.

Butler adopted Roxy and Remi to cope with the loss of his parents.

On Senior Day, the dogs got decked out in the Spartan gear to walk with their dog daddy during his special moment. The trio received a round of applause as they took the field.

“Definitely been a blessed journey since taking the greyhound bus as a kid all the way up to Michigan State, being able to prevail through losing my father in 2017, and seeing my mother pass away in my arms just this year in April from Cancer,” the athlete wrote on Instagram. “It has strengthened me as a person, man of God, and leader.”