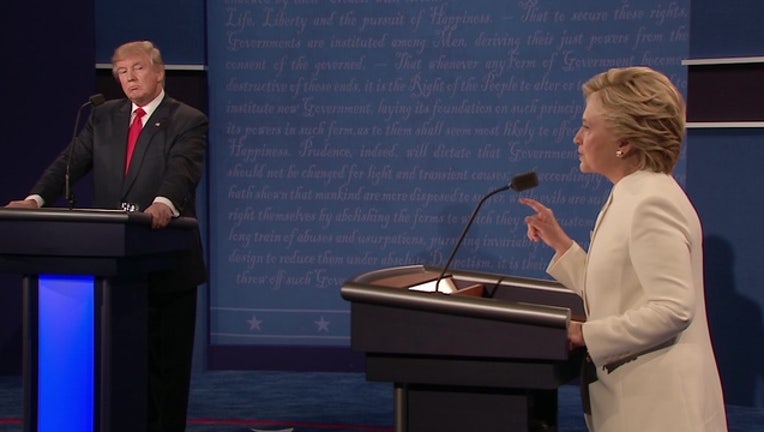 Hillary Clinton and Donald Trump faced off at the University of Nevada, Las Vegas for the final time during the last presidential debate before the Nov. 8 election.

Conducted from Thursday to Sunday, the poll also found that incumbent Republican U.S. Sen. Marco Rubio has a seven-point edge over Democratic challenger Patrick Murphy in a race that could help decide which party controls the Senate.

The numbers in the Clinton-Trump showdown were virtually identical to a Quinnipiac poll released Wednesday. The Connecticut-based university also released poll results Monday showing Clinton up by a narrow two-point margin in North Carolina, another key state in Tuesday's election.

In comments released with the results, Peter A. Brown, assistant director of the Quinnipiac University Poll raised the prospect of an election similar to the 2000 race, when 537 votes in Florida ultimately gave the presidency to Republican George W. Bush over Democrat Al Gore.

Meanwhile, Opinion Savvy conducted a statewide survey Sunday night for FOX 13 with similar results.  Pollster Matt Towery concluded the race has narrowed to a two-point contest, with Clinton up on Trump, 48 to 46 percent.

That lead is also within the poll's 3.4 percent margin of error.

"Trump is gaining among independent voters and is consolidating his vote among voters 45 years of age and older," Towery observed.  "It's really now all about turnout but clearly Trump has momentum on his side."

Political analysts widely believe that Trump needs to win Florida and North Carolina to have a shot at capturing the White House.

"There is no realistic scenario under which Trump can win the White House without those two states, while Clinton might get there without them, but it's not a road she wants to travel," Brown said in comments released with the poll results.

Both campaigns were making eleventh-hour efforts to turn out voters, with Trump slated to appear at 11 a.m. Monday in Sarasota County. Meanwhile, Vice President Joe Biden was scheduled to campaign on behalf of Clinton in Tallahassee and St. Petersburg.

"U.S. Rep. Patrick Murphy is not getting the support a Democrat needs among women and non-white voters to overcome Sen. Marco Rubio's lead among men and white voters," Brown said.

The poll released Monday surveyed 884 likely Florida voters and had a margin of error of 3.3 percentage points.