LONDON - With Charles becoming Britain’s king following the death of his mother, Queen Elizabeth ll, his sons and grandchildren are next in succession for the monarchy.

Here are the first 15 people in order of succession:

1. Prince William, the elder son of Charles and the late Princess Diana. He is married to Kate, the Duchess of Cambridge. Their three children follow him in the line of succession.

5. Prince Harry, the younger son of Charles and Diana.

6. Archie Mountbatten-Windsor, born to Harry and Meghan, Duchess of Sussex, in May 2019.

12. August Brooksbank, born to Eugenie and James Brooksbank in February 2021.

14. James, Viscount Severn, the younger child of Edward and his wife Sophie, Countess of Wessex. 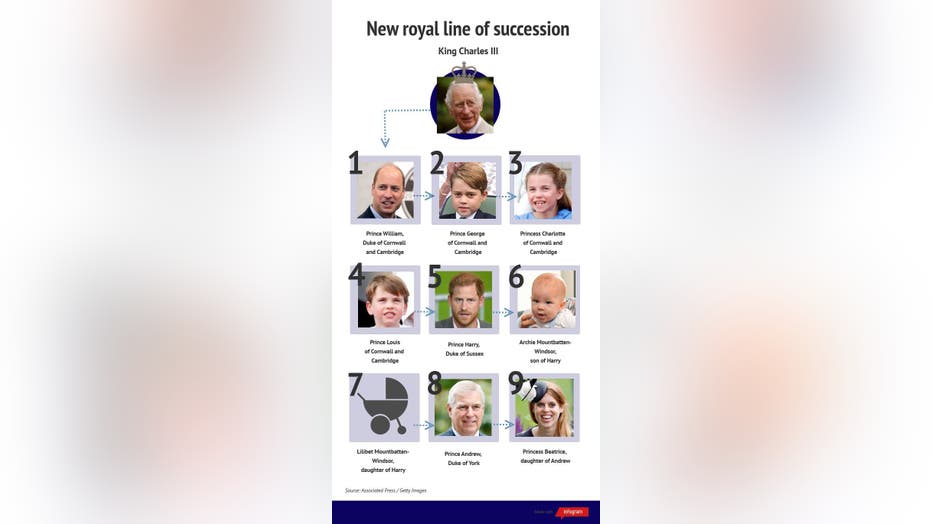 Britain's longest-reigning monarch died at Balmoral Castle Thursday at the age of 96. Elizabeth was queen for 70 years after taking the thrown in 1952. Prince Charles immediately succeeded his mother as king of the U.K.

RELATED: Now that the Queen has died, what happens to her corgis?

As the country began a 10-day mourning period, people around the globe gathered at British embassies to pay homage to the queen. In London and at military sites across the United Kingdom, the firing of 96-gun salutes marked each year of the queen’s long life. In Britain and across its former colonies, the widespread admiration for Elizabeth herself was occasionally mixed with scorn for the institution and the imperial history she represented.

Hundreds of people arrived through the night to leave flowers outside the gates of Buckingham Palace, the monarch's London home, or simply to pause and reflect.

Finance worker Giles Cudmore said the queen had "just been a constant through everything, everything good and bad."

"She’s just been the foundation of my life, the country," he said.

"Charles can never replace her, you know, and that makes sense," said 31-year-old Londoner Mariam Sherwani.

Like many mourners, she referred to Elizabeth as a grandmother figure. Others compared her to their mothers or great-grandmothers. U.S. President Joe Biden called her a "stateswoman of unmatched dignity and constancy who deepened the bedrock alliance between the United Kingdom and the United States."

King Charles III says he feels "profound sorrow" over the death of his mother, Queen Elizabeth II, and is vowing to carry on her "lifelong service" to the nation.

Charles made his first address to the nation as monarch Friday. He became king on Thursday after the queen’s death.