Teen smacked in face by seagull on Sing Shot ride

A teenager riding a thrill ride at a New Jersey amusement park became a viral sensation when a seagull flew into her face mid-ride. The park’s cameras not only caught the moment that it happened, but also her friend’s complete lack of awareness as to what was happening.

Cedar Point has closed one of its attractions for the remainder of the 2021 season after a woman was injured from a flying piece of metal that dislodged from the ride.

The Top Thrill Dragster will remain closed while the Ohio Department of Agriculture’s Division of Amusement Ride Safety & Fairs, third-party investigators, engineers and the ride’s manufacturer investigate exactly how a "small metal object" detached from the roller coaster last weekend.

A Cedar Point spokesperson previously confirmed to Fox News that the object detached as the ride was ending its run.

"We refuse to operate any ride or attraction without total confidence in its safety," Cedar Point wrote in a Facebook post Thursday.

The company further noted that it wouldn't "rush the investigation and will work tirelessly in our search for answers in the interest of improving safety." 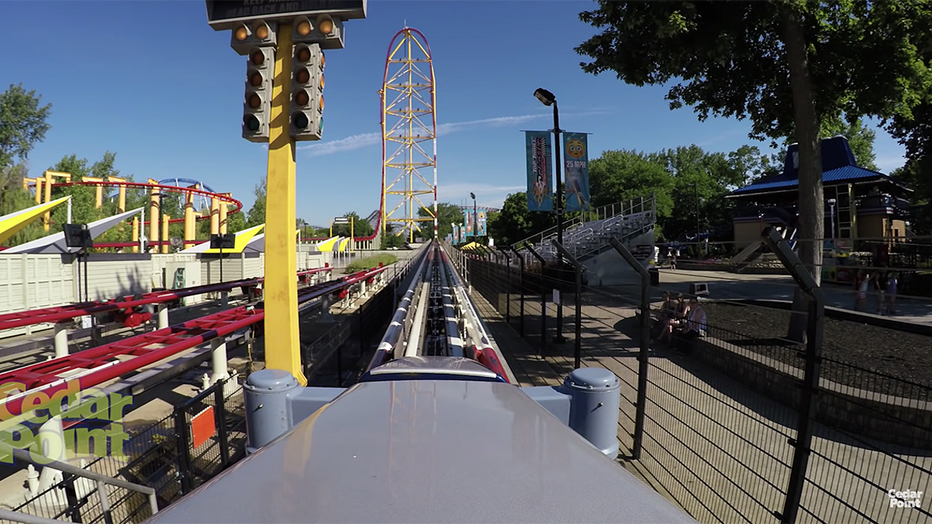 The Top Thrill Dragster will remain closed while the Ohio Department of Agriculture’s Division of Amusement Ride Safety & Fairs investigate exactly how a "small metal object" detached from the roller coaster . (Cedar Point)

Just after 4 p.m. on Sunday, Sandusky police officials received a radio call for an injured female at Cedar Point's Top Thrill Dragster roller coaster, according to a police report obtained by Fox News.

The unidentified victim was later moved onto a cot, brought to an ambulance just outside the ride's entrance and transported to Fireland Hospital's emergency room for treatment. Police were unable to provide an update on the victim's condition.

"Our team has the health and welfare of our guest who was involved in Sunday’s incident at Top Thrill Dragster at the forefront of our minds," the amusement park wrote. "We will continue to offer our support to her and her family in this unimaginably difficult time."

RELATED: Cedar point won't require masks or limit capacity on rides this year - here's what else to know

The roller coaster's last inspection took place on May 14 with four ODA inspectors. By law, the ride is required to undergo an inspection twice a year, with a minimum of two inspectors performing each inspection.

The next inspection was slated for September.

However, the ride has faced issues in the past. Back in 2004, four individuals were injured after being struck by debris that sheared off the ride's launch cable, according to Fox 8.

For more on this story, see Fox Business.