Signs in the race for sheriff in Central Florida are being vandalized. FOX 35's Valerie Boey has the story.

ORLANDO, Fla. - Campaign signs for the race for sheriff in Central Florida are being targeted.

It may sometimes seem like a joke, but vandalizing campaign signs is a serious crime.

Seminole County Sheriff Dennis Lemma says six of his large signs have been targeted with spray paint, derogatory remarks and even googly eyes. 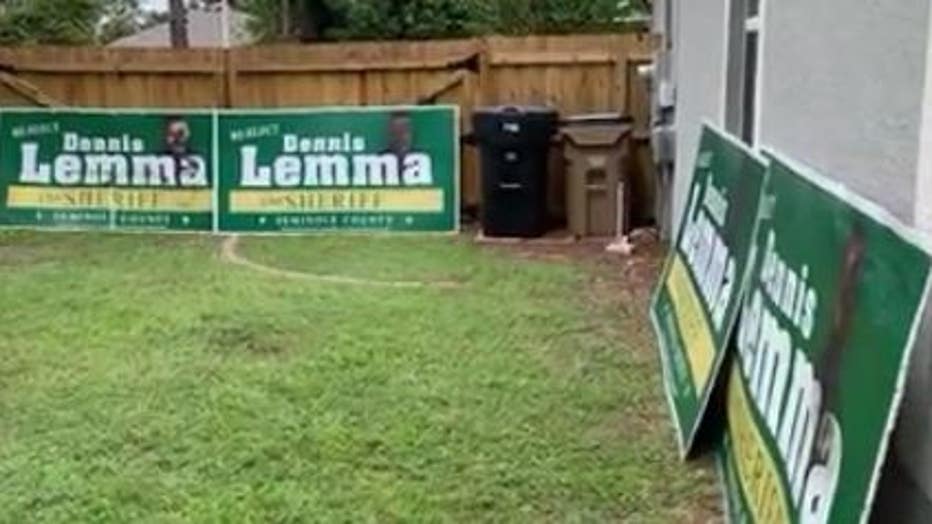 Sheriff Lemma, running for re-election as Seminole County's sheriff, says, "The strangest thing, somebody’s put these very, very comical googly eyes on a majority of our signs throughout the county. Very bizarre looking."

He's not the only one. Other sheriff candidates around Central Florida have been hit.

Lemma's opponent Spike Hopkins estimates around $1,000 worth of damage to his signs, including one with Sheriff’s Lemma’s name spray-painted on it.

"Within the last week, I’ve had eight of my large expensive signs either stolen, taken down, thrown in canals or broken. It's very disappointing."

In Orange County, former sheriff’s candidate Joe Lopez had more than a dozen signs stolen during the primary.

And in Osceola County, Marco Lopez said, "I’ve had six or seven damaged or stolen, and we just had a bunch picked up the other day."

Lopez says the signs vary in price depending on the size.

We asked, "Is this considered a big hit to your campaigns?"

Lopez said, "Yes it is, because when you’re on a limited budget, it does affect you."

Hopkins said, "You figure thousands, upon thousands of people drive by these signs every day is main exposure."

Sheriff Lemma says it could be anti-law enforcement people tampering with the signs. He says it’s unfortunate that someone sprayed his name on Hopkins' campaign sign.

"It’s inappropriate and if I could find out who’s responsible for the vandalism of his signs, I’ll be working with the state attorney’s office to have them prosecuted."

They recommend voting over vandalism to support a candidate.