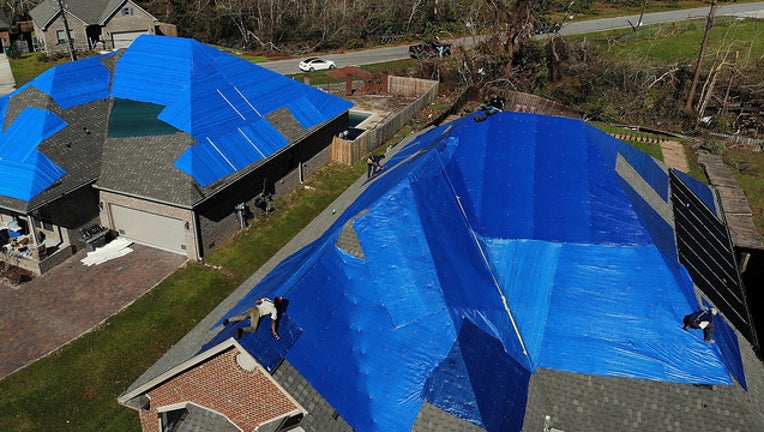 Workers place a tarp on a damaged roof as people start the process of rebuilding after Hurricane Michael on October 16, 2018 in Panama City, Florida. (Photo by Joe Raedle/Getty Images)

“I don’t see why those need to be separated out,” Bradley told reporters at the Capitol. “I don’t think there should be money used only for oil spill and another pot for Hurricane Michael concerns. So, the idea that we would utilize Triumph (Gulf Coast) both for its bonding capacity and real dollars to help address things in the Panhandle, I think that’s a serious discussion we need to have in his building.”

Created by the Legislature, the non-profit agency Triumph Gulf Coast was created to distribute to Bay, Escambia, Franklin, Gulf, Okaloosa, Santa Rosa, Wakulla and Walton counties three-quarters of the $2 billion the state will get over the next 12 years through the BP settlement. As part of its charge from the Legislature, Triumph is expected to direct money to regional projects that have wide impacts rather than directly to individual businesses.

State lawmakers are expected during the legislative session that begins March 5 to consider spending millions of dollars to aid Hurricane Michael recovery efforts, though they have not specified an amount.

The state got some relief when Gov. Ron DeSantis announced last week that President Donald Trump’s administration expanded the number of days Florida and local governments would receive full reimbursement for debris cleanup from five to 45.

Florida Division of Emergency Management Director Jared Moskowitz has estimated the White House move will save the state and local governments “hundreds of millions of dollars” in cleanup expenses from the Category 4 storm, which created seven to 10 times as much debris as Hurricane Irma in 2017 --- though Irma affected more areas of the state.

Bradley’s comment last week followed a similar request from state Chief Financial Officer Jimmy Patronis, who is from the hard-hit Panama City area. Also, Rep. Brad Drake, R-Eucheeanna, has filed a bill (HB 191) that would create the Northwest Florida Rural Inland Affected Counties Recovery Fund, which would receive a portion of money from the BP settlement.

“The Legislature recognizes that as a result of the Deepwater Horizon disaster, the rural inland affected counties of Northwest Florida continue to face extraordinary challenges in significantly improving their economies, specifically in terms of household income, job creation, average wages, and strong tax bases,” Drake’s bill said. “The Legislature also recognizes that this area is designated as a rural area of opportunity by the governor.”

“My team has reviewed the law governing Triumph funds, and it seems to provide many allowable uses,” Patronis wrote to the board on Jan. 11. “Specifically, we believe these funds are an appropriate funding source to help rebuilding efforts by making secured loans to local governments.”

The Triumph board is awaiting a report about the economic impacts of the storm.

On Jan. 17, Triumph Chairman Don Gaetz, a former state Senate president from Niceville, advised Patronis that counties in the Triumph region hadn’t asked for any changes to their priority lists or for projects to be substituted because of Michael.

Still, Gaetz wrote there might be a need to use the money for secured loans to cover local governments that may suffer from revenue reductions due to storm-related drops in property values.

“County officials and the members of the Triumph Gulf Coast Board understand that the sustained jobs created by Triumph-funded projects will be even more important in a post-hurricane economy struggling to recover,” Gaetz wrote. “We have, however, received some indication that one or two counties may approach Triumph for assistance in making up reduced ad valorem property tax revenues.”

Triumph Executive Director Susan Skelton has started talks with state bond-finance Director Ben Watkins about possible financing, which is expected to be on the board’s agenda in late February.

Also expected to be on the February agenda will be a discussion of the role of Triumph and the state working with private- sector financial institutions on loans.