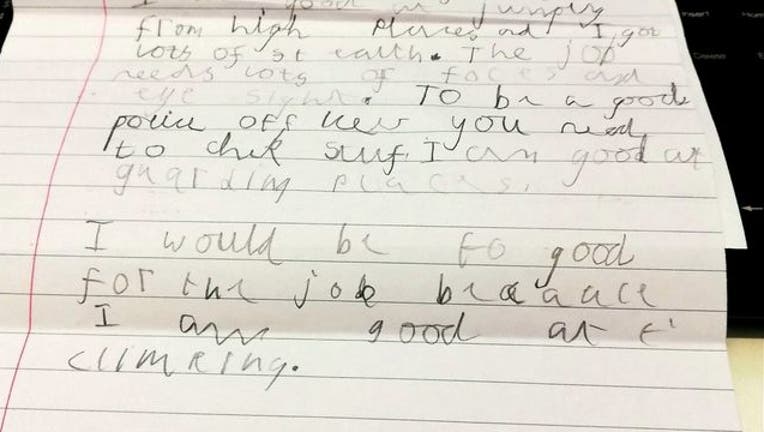 FOX NEWS - A 7-year-old boy with “lots of stealth” is confident he’s got the chops to be a law enforcement officer, citing his talents in “jumping from high places,” “guarding” and “climbing” in a persuasive essay to his local police department.

Harcharan, who is enrolled at Morley Memorial Primary School in Cambridge, England, has won laughs and applause for his honesty in the handwritten note, Metro reports. The Sawston Police Station of the Cambridgeshire Constabulary received the letter on June 16, which Harcharan penned during a writing exercise in school.

"I would love to be a police officer to stop diamond heists and bank robberies. I'm good at dodging objects and I got good eye sight,” the boy begins. “I am good at jumping from high places and I got lots of stealth.”

"The job needs lots of focus and eye sight. To be a good police officer you need to check stuff,” he continues. “I am good at guarding places. I would be good for the job because I am good at climbing.”

Reps for the police got a kick out of Harcharan’s eager pitch and shared the earnest letter to their Facebook page earlier this week.

“We are definitely persuaded!” Policing Cambridge City wrote online of the “wonderful letter.”

Though young Harcharan has to wait more than a decade until he turns 18 to seriously pursue his policing career, some social media commenters couldn’t help but cheer the boy on.

“Bless him, I wonder if he will change his mind when he grows up!” one Facebook user wrote online.

“Hope you’ve signed him up!” another agreed.