After the Boston Marathon was postponed, this teacher was cheered on at home

Lacey Way ran her own marathon in Auburn, Wash. after the Boston event was postponed. (Credit: Jen Skeel via Storyful)

BOSTON - Benson Kipruto of Kenya won the 125th Boston Marathon as the world’s oldest and most prestigious annual 26.2-mile race returned from a 30-month hiatus due to the pandemic.

Spectators watched Kipruto run away from the lead pack as it turned onto Beacon Street with about three miles to go and break the tape in 2 hours, 9 minutes, 51 seconds. Diana Kipyogei won the women's race to complete the eighth Kenyan sweep since 2000.

A winner in Prague and Athens who finished 10th in Boston in 2019, Kipruto waited out an early breakaway by American CJ Albertson, who led by as many as two minutes at the halfway point. Kipruto took the lead at Cleveland Circle and finished 46 seconds ahead of 2016 winner Lemi Berhanu; Albertson, who turned 28 on Monday, was 10th, 1:53 back.

Hug, who has raced Boston eight times and has five victories here, cost himself a $50,000-course record bonus when he missed the second-to-last turn, following the lead vehicle instead of turning from Commonwealth Avenue onto Hereford Street. 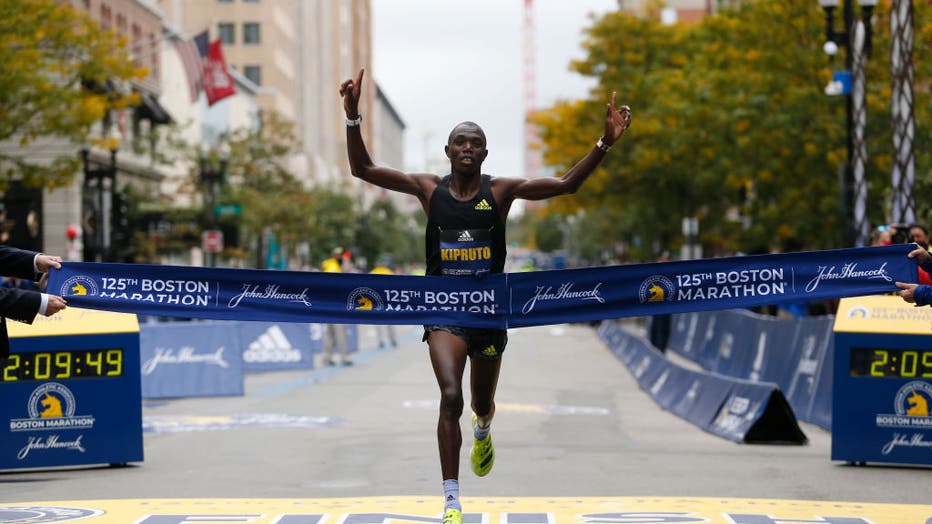 Light rain and weather in the 50s greeted the runners participating in the race to Copley Square, which included roughly 20,000 participants who qualified.

The race in 2020 was postponed until September because of the pandemic, then called off for the first time in its history since the first race in 1897. Last year, more than 16,000 registered runners completed the distance by themselves as a virtual event.

This year’s race was moved from its normal Patriots’ Day in April to October in hopes that the pandemic would subside by fall.

At 6 a.m. Monday, Boston Marathon Race Director Dave McGillivray sent a group of about 30 from the Massachusetts National Guard that walks the course annually, announcing the start of the event. McGillivray said after that he was relieved to finally be back.

"It’s a great feeling to be out on the road," McGillivray told the Associated Press. "Everyone is excited. We’re looking forward to a good day."

The rolling start began at 9 a.m. ET for participants, allowing for more social distancing on the course. As organizers tried to manage the annual event steeped in tradition amid a changing COVID-19 pandemic, everything was different this year.

It was the first fall edition of the marathon ever. Runners had to show proof that they’re vaccinated or they had to test negative for COVID-19, and they had to wear masks until they crossed the start line. They also didn’t wait and stretch in the traditional athletes’ village before lining up in corrals.

For social distancing, the field was about one-third smaller instead of the usual 30,000 participants. It also included more Americans than normal since many athletes from countries with strict COVID-19 quarantine rules couldn’t attend.

The crowds along the course were also noticeably smaller. Wellesley College students were told not to kiss the runners as they pass the school’s iconic "scream tunnel" near the halfway mark. 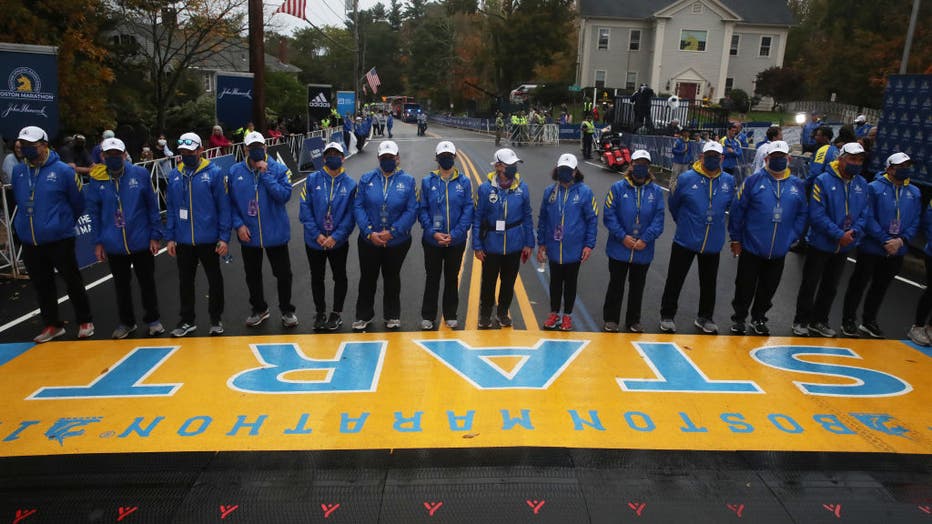 A human chain stands at the start of the 125th running of the Boston Marathon in Hopkinton, MA on Oct. 11, 2021. (Photo by Craig F. Walker/The Boston Globe via Getty Images)

There was a heavy police presence with patrol cars driving down the streets and officers congregated throughout the race’s path. In 2013, two bombs killed three spectators and maimed more than 260 others at the Boston Marathon.

This year’s race also came following the death of Dick Hoyt, who inspired thousands of runners, fathers and disabled athletes by pushing his son, Rick, in a wheelchair in dozens of Boston Marathons and hundreds of other races.

Hoyt first pushed his son, who is quadriplegic and has cerebral palsy, in the Boston Marathon in 1980. Dick and Rick, in a specialized wheelchair, completed 32 Boston Marathons together, until Dick, citing health issues, retired in 2014. He had planned on retiring after the 2013 race, but the father and son never finished because of that year's finish line bombing, so they came back one more time.

He died on March 17 after suffering from an ongoing heart condition.

"We will sincerely miss Dick, and continue to keep his many family and friends in our thoughts and prayers," the association said of this year’s race.

A virtual Boston Marathon was also held in conjunction with the in-person race, allowing more than 27,000 runners around the world to take part, organizers said. Runners in more than 100 countries and all 50 states ran the 26.2 miles in their neighborhoods to earn a commemorative unicorn medal.