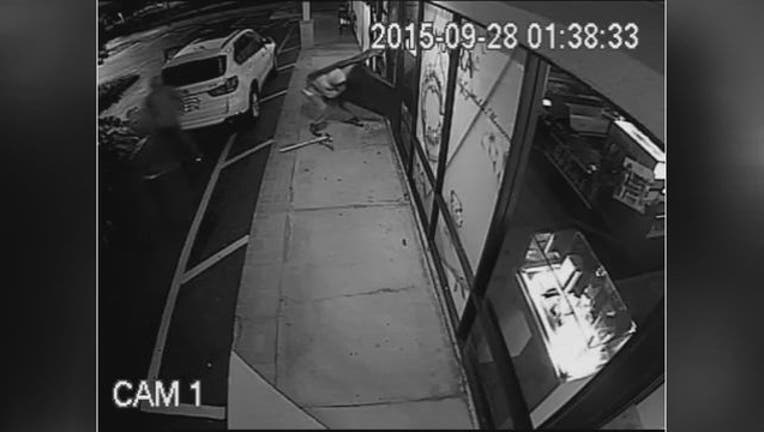 SPRING HILL, Fla (WTVT FOX 13) - With an ax and a rolling garbage can, two jewelry thieves got away with about $30,000 worth of watches, rings, earrings and other items.

Last Monday around 2:35 a.m., surveillance video shows a white BMW X5 pull up to Nature Coast Jewelers on Forest Park Boulevard in Spring Hill. One suspect got out and walked toward the store's front door where, investigators think, a garbage can was placed sometime earlier.

The video shows the male suspect pull the ax from inside the garbage can before swinging it at the front door.

"He smashed it numerous times. He broke the door then wheeled the trash bin in and then emptied some of the glass counters after smashing them," Hernando County Sheriff's Office Spokesperson Denise Moloney said.

The store owners said, after the suspect busted in, they think he wanted what's usually inside the Pandora display, but because those items are locked in a safe at night, he turned his attention elsewhere.

In all, the owners estimate about $30,000 worth of Citizens watches, Luminox watches, Kameleon silver rings, earrings, an interchangeable gem line called Jewel Pops, and a small Pandora display were stolen.

"The suspect was in and out of the jewelry store very quickly, so if you think about it, it doesn't take that long to rack up $30,000 in jewelry," Moloney said.

Based on the surveillance video's timestamp, it appears the suspect was in and out in less than three minutes.

Because of the speed of the heist and its precision, Moloney thinks the group had experience and possibly has done this before.

Toward the end, the surveillance video shows the getaway driver pull back up and help load the trash can loaded with jewelry into the SUV before speeding off.

The sheriff's office was not able to identify a license tag number on the SUV.

They're looking for tips and released the following:

If you recognize these individuals or have any information on this case, notify Detective Robert Desmond or Detective Eric Dunn at 352-754-6830.