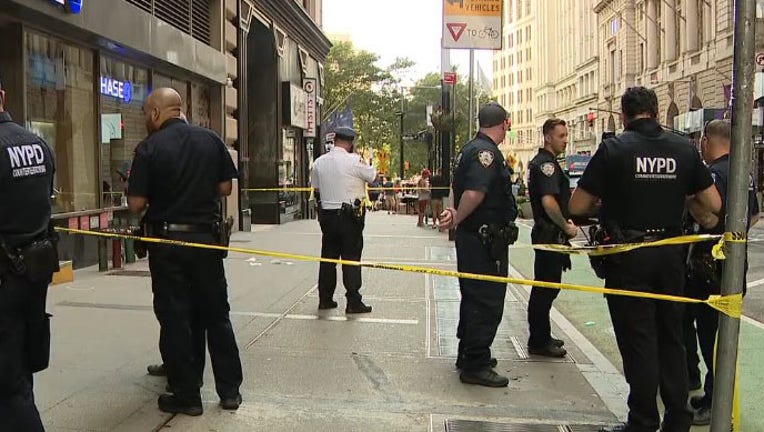 A man was attacked with a hatchet inside the ATM area of the Chase Bank at 42 Broadway in Lower Manhattan. (NYPD)

NEW YORK - The NYPD was questioning a person of interest Wednesday in the brutal attack with a hatchet of an unsuspecting man in Lower Manhattan.

The assault took place Sunday just before 5:30 p.m. in inside the ATM area of the Chase Bank at 42 Broadway.

Video of the attack obtained by the NY Post showed the suspect walk in, take out a hatchet from a bag, and then slash the victim multiple times.

The 51-year-old man was slashed in the head and leg, said police.

The video showed the man trying to push the man off and grab the hatchet as he repeatedly falls to the floor.

The suspect left the hatchet and a backpack after smashing the screens of the ATM.

The victim was taken to Bellevue Hospital in stable condition.

A woman slashed another woman in the leg inside an apartment on the Upper East Side, said police.

RELATED: Woman slashed in the leg with hatchet on Upper East Side

Police reportedly took a man in after he was seen smashing car windows in Chelsea, police said.

In April, a woman slashed another woman in the leg inside an apartment on the Upper East Side, said police. Both women were at a mutual friend's apartment when they got into an argument and one of them attacked the other with a hatchet, according to officers.