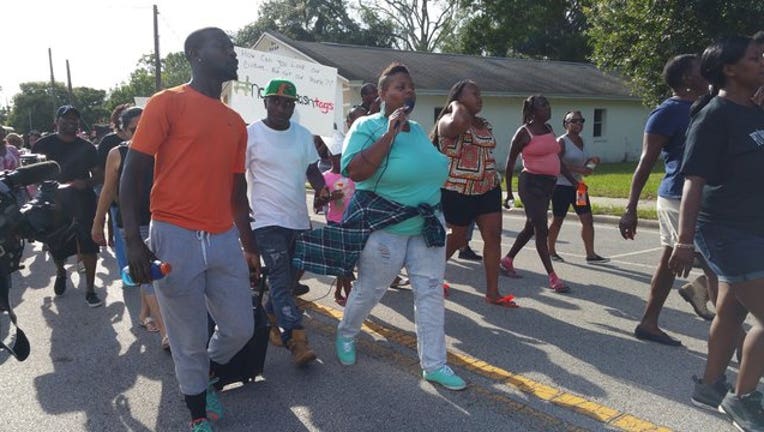 SANFORD, Fla. (WOFL FOX 35) - Around 50 to 70 people gathered in Sanford to take part in a Black Lives Matter march.  They walked side by side, as a symbol of unity.

"To me, not only does black lives matter, all lives matter. It's about everybody. Stop killing one another," said co-organizer Katrina O'Neal.

Residents marched with the Black Lives Matter movement, hoping to make a difference.  "The importance is a lot of people are going through the stress and grief of seeing these shootings on television, this is a good outlet for our people," said attorney and activist Natalie Jackson.

U.S. Highway 17-92 was shut down for the first time in history just for the march. Police escorted them, making sure they were safe.  Co-organizer Starr Lawrence said,, "Right now today, you got people rather run from police than be arrested, cause they don't know what to expect and it's a shame that they have that image. We are here to make a difference."

Sanford Police officers also participated, by handing out water. We asked Deputy Chief Darren Scott if he was afraid for his own safety, after the shooting in Dallas.

"Everyone is on heightened alert. It's normal." But he says it's important to continue focusing on a solution to prevent other shootings. "This is just one of many. Coming together, embracing, we need to be more transparent, we need to listen to one another, there's just so much but you gotta start some where."

For these residents like Katrina, it means a lot. "I'm so glad they're patrolling, because there's shootings going on and young kids they don't care and it's sad." And more marches will be taking place in other areas of Central Florida this weekend.