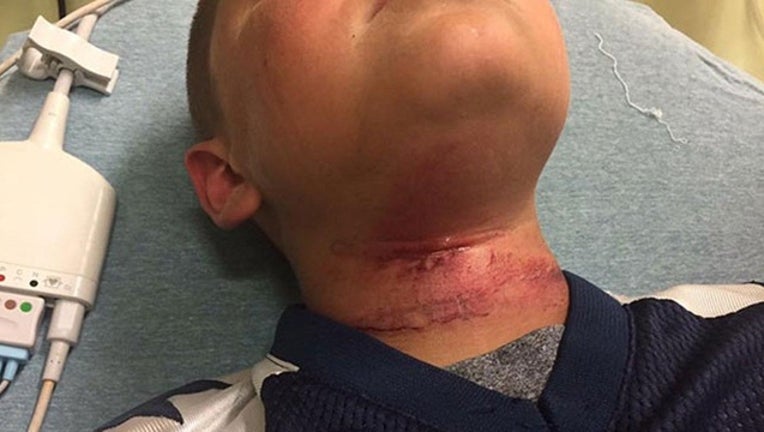 CLAREMONT, N.H. (AP) - More than 100 people, holding hands and singing "We Shall Overcome," gathered at a park to offer support to the family of an 8-year-old biracial boy who was nearly hanged by a group of teenagers.

The boy's grandmother said the teens taunted him with racial slurs on Aug. 28 in the mostly white town of Claremont and pushed him off a picnic table with a rope around his neck. The boy was treated at a hospital for injuries to his neck and has been released.

Claremont police Chief Mark Chase said his department was investigating a "serious incident" involving juveniles in which an 8-year-old was hurt but declined to provide details.

Town resident Rebecca MacKenzie said she felt compelled to organize the Tuesday evening rally in the park to draw attention to a climate of racial intolerance and xenophobia.

"Claremonters are good people and, even as good people, we need to face the facts of racial injustice and begin a deep dialogue of how to deal with it in our community," she said.

The rally came as Republican Gov. Chris Sununu asked that the state attorney general's office help with an investigation into what happened in Claremont. The attack on the boy has gotten plenty of attention on social media after relatives posted images of his rope burns and details of what they say happened.

Democratic U.S. Rep. Annie Kuster said she was "outraged and sickened by the chilling images on social media and in the news."

The boy's family did not attend the rally, but several biracial families did from towns around Claremont and talked of the shock of hearing the news. None said their children had been targeted as the Claremont boy had been but said they had friends who had been called racial epithets or beaten up because they are not white.

"As a mother of a biracial child, this incident sent a chill through my entire body. As a mother, it broke my heart," said Karen Liot Hill, a city councilor and former mayor from nearby Lebanon.

People in the crowd, some holding signs that read "Teach Love Not Hate" and "Stand Together," listened as religious leaders, city officials and the police chief talked about the attack on the boy as a turning point in the community.

"This touched a deep chord with community members," said Allen Damren, the assistant mayor in Claremont. "It got them up and moving, got them thinking and got them here."