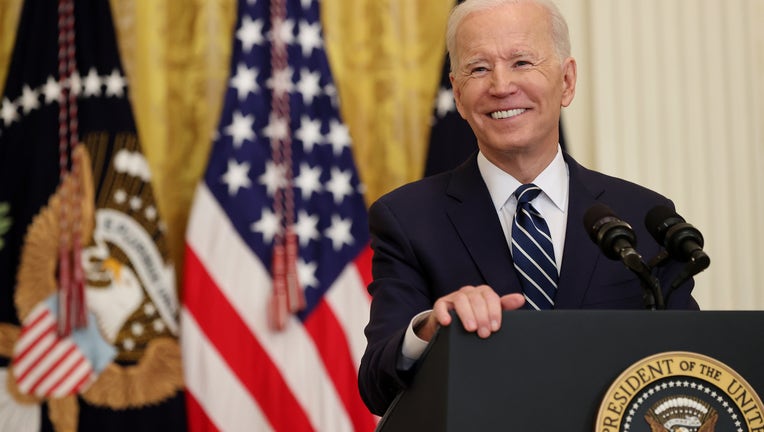 U.S. President Joe Biden smiles during the first news conference of his presidency in the East Room of the White House on March 25, 2021 in Washington, DC. On the 64th day of his administration, Biden, 78, faced questions about the coronavirus pandem

He's only a little over two months into his tenure in the White House, but President Biden says it's his "expectation" that he'll run for reelection in 2024.

There’s been intense speculation – dating back to his the launch of his White House bid nearly two years ago - whether the now-78-year-old Biden would run for a second term. The former vice president made history last November when he became the oldest person ever elected president.

Asked Thursday at the first formal news conference of his young presidency about his 2024 plans, Biden said "my answer is yes. I plan on running for reelection. That’s my expectation."

Facing a second question from another reporter about his 2024 reelection plans and whether Vice President Kamala Harris would be his running mate once again, Biden repeated that it’s his "expectation" that he'll run again that that Harris would be with him on the Democratic ticket.

If he campaigns for reelection in 2024 and wins, Biden would be 82 at his second inaugural and 86 at the end of his second term.

He then quipped about Trump, saying "my predecessor, oh God I miss him."

The former president has repeatedly flirted with a 2024 campaign. Trump predicted during a speech last month at the Conservative Political Action Conference (CPAC) that in 2024 "a Republican president will make a triumphant return to the White House." And teasing a potential run, he asked, "I wonder who that will be?"

Later in his speech, Trump once again falsely claimed he won last November’s presidential election and triggered an explosion of applause and cheers among the crowd in Orlando, Florida, when he said of the Democrats, "who knows … I may even decide to beat them for a third time."

Two weeks ago, in an interview on "Fox News Primetime," the former president once again teased a potential 2024 campaign and hinted that "we'll make our decision after" the midterm elections.