WASHINGTON - John Kerry, one of the leading architects of the Paris climate agreement, is getting one more chance to lead the fight against climate change after President-elect Joe Biden named the longtime senator and former secretary of state as climate envoy for national security.

Biden's team gave little immediate detail on Monday about how he envisioned Kerry shaping the new job, which many on social media and on all sides of the climate-action spectrum were quick to dub “climate czar.” But the transition team made clear that it will be a prominent role, with Kerry becoming the first member of the National Security Council to focus exclusively on climate change.

It was one of Biden’s first steps making good on campaign pledges to confront climate-damage from fossil fuel emissions more broadly and forcefully than any previous U.S. administration. And it's a sign of how the incoming administration is heeding warnings that natural disasters from global warming will weaken U.S. defense and spur conflicts around the globe.

Trump and Biden speak on the environment

Trump and Biden discuss aiding the U.S. economy while supporting the environment.

At 76, Kerry has the stature to help him make deals with foreign governments on global climate efforts. But he's up to a half-century or more older than the activists who pushed climate change to the forefront of national politics over the past four years.

Varshini Prakash, the executive director of the Sunrise Movement climate group, whose members skew younger, called the appointment a “very good move,” saying Kerry combined a long track record on climate issues with a commitment “to engaging and listening to young voices.” But Prakash called for Biden to go further, and create a new domestic federal office to push agencies on climate efforts.

The incoming administration’s move comes after four years in which President Donald Trump pulled the United States out of the Paris climate accord, promoted more drilling of climate-damaging oil and gas and mining of coal, and steadily dismantled Obama administration efforts to rein in fossil-fuel emissions. 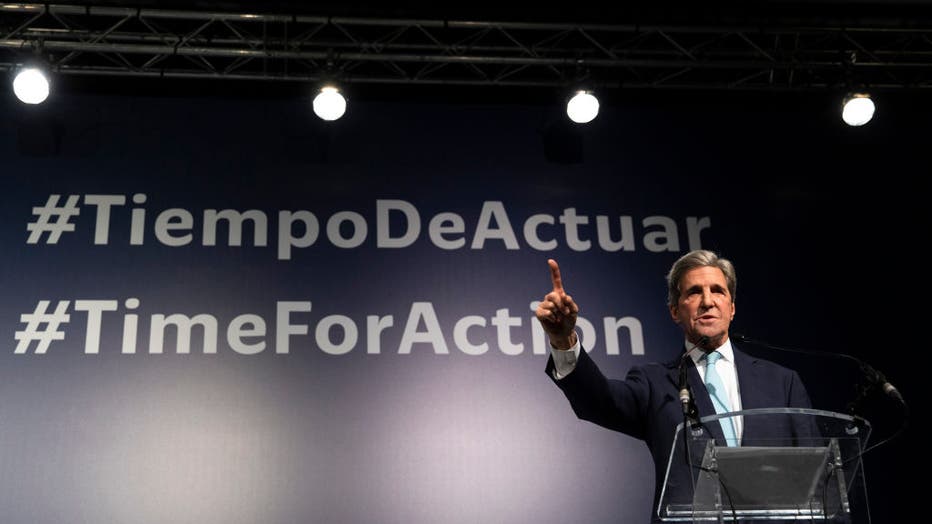 FILE - Former US Secretary of State John Kerry speaks during a conference at the COP25 Climate Conference on December 10, 2019 in Madrid, Spain. (Pablo Blazquez Dominguez/Getty Images)

Biden has pledged to get the U.S. back into the Paris climate accord. After 2018 midterm elections in which young progressives like New York Democratic Rep. Alexandria Ocasio-Cortez succeeded in pushing climate change toward the front of the U.S. political agenda, Biden in his presidential race promised a $2 trillion plan to overhaul the nation’s transportation and power sectors and buildings to curb fossil fuel emissions.

Kerry was a senator from Massachusetts, failed Democratic presidential candidate against George W. Bush in 2004, and Obama’s second secretary of state from 2013 to 2017.

In the Senate, Kerry in 2010 was one of the main authors of one of the biggest legislative pushes to date by the Congress to limit fossil fuel emissions. It failed.

But “it is important somewhere in Biden’s administration,” particularly in climate, to see “not just the same people and actors we have seen before on these issues,” Hartl said.

Other environmental advocates — some of whom want the U.S. to pivot away from all fossil fuels within a few years — were more acerbic. Wenonah Hauter of Food and Water Action said Kerry’s record was far too tepid on limiting fossil fuels. “Kerry’s proposals are tired ideas from years past that will do little or nothing to address our climate crisis,” Hauter said in a statement.

The U.S. military has warned in a series of reports that climate change is a security threat on many fronts. That includes “through direct impacts on U.S. military infrastructure and by affecting factors, including food and water availability, that can exacerbate conflict outside U.S. borders,” the federal government’s most recent, grim climate report said.