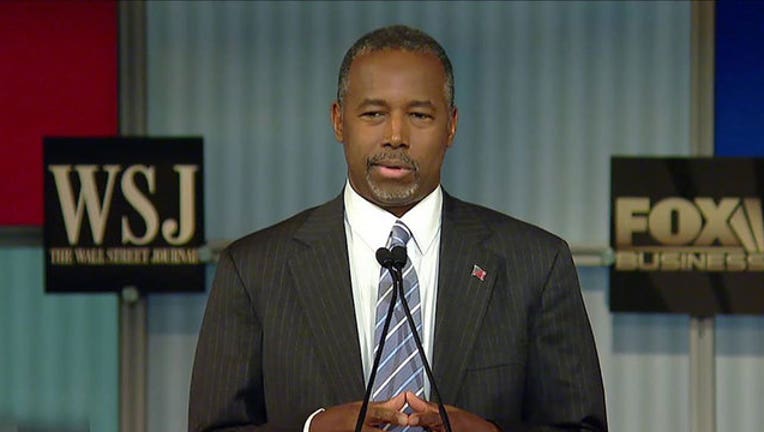 PHOENIX (AP) - Republican presidential candidate Dr. Ben Carson said Friday that this week's mass shooting in Southern California should end the debate over whether Syrian refugees can safely be screened.

The retired neurosurgeon told a pro-business group made of lawmakers from across the nation that if it turns out the woman involved was fully vetted by federal officials and cleared to enter the U.S. it should help end the refugee debate.

"Now if that vetting resulted in missing someone who carried out such a horrendous crime that should be the end of the argument right there," Carson said.

The FBI said Friday that it is investigating the shooting in San Bernardino, California as an act of terrorism. A U.S. law enforcement official said the woman who helped her husband carry out the attack had pledged allegiance to the Islamic State group and its leader on Facebook under an alias.

Syed Farook and his wife, Tashfeen Malik, killed 14 people at the holiday party for his co-workers. The Muslim couple died hours later in a fierce gunbattle with police.

Carson, a political newcomer who has cast himself as an outsider, made his comments to the American Legislative Exchange Council as he tries to burnish his foreign policy credentials amid slipping national poll numbers.

The group known as ALEC is made up mainly of state-level lawmakers, primarily conservative Republicans, and big business groups.

Carson recently completed a visit to the Middle East amid questions about his grasp of foreign policy. His standing in the polls alongside Republican front-runner Donald Trump has been falling.

During his comments Friday, Carson also laid out his strategy for defeating the Islamic State group that has helped cause the refugee crisis. He said the U.S. should attack the oil industry that helps fund the group, cut off its de facto capitol of Raqqa, counter IS propaganda on social media and attack it on all fronts.

"You keep after them, you keep them on the run, and you don't let them sit there comfortably and concoct mechanisms for terrorizing the rest of the world," Carson said. "I don't know what ever happened to our capacity for warfare. But I somehow have the feeling that there are many of our experts and our generals who would agree with me that we need to be aggressive in carrying the war to them over there, and we need to not just contain them, but we need to destroy them."

Carson's speech also touched on his personal narrative of growing up in a rough neighborhood before making good, along with a defense of police officers he says have gotten "a bad rap," a pitch for smaller government and a proposal for a flat tax for all income levels.

"We need to buy that debt down, we need to have fiscal policies that make sense, we need a balanced budget amendment, we need term limits," Carson said as he patted a bust of Thomas Jefferson that was on stage. "This man was a genius. He said we would get to this point in this country because the people would become lax ..." Carson said that would result in government growing and beginning to dominate "the people."