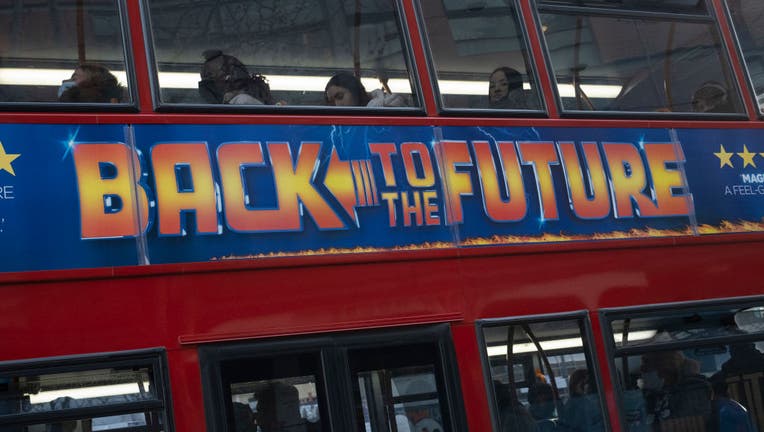 Bus advertising the West End musical Back to the Future on 13th January 2022 in London, United Kingdom. Back to the Future: The Musical is a stage musical adapted from the original film screenplay. (photo by Mike Kemp/In Pictures via Getty Images)

NEW YORK - Fans of the 1985 hit sci-fi flick "Back to the Future" will have a chance to see it on Broadway in New York City when the musical opens next summer.

According to the musical's website, the curtain will rise on June 30, 2023, at the Winter Garden Theater.

"Welcome to Hill Valley! When Marty McFly finds himself transported back to 1955 in a time machine built by the eccentric scientist Doc Brown, he accidentally changes the course of history," the website said. "Now he’s in a race against time to fix the present, escape the past and send himself... back to the future."

The movie tells the story of a teenager, who accidentally traveled back in time in a DeLorean automobile and inadvertently prevented his future parents from falling in love, threatening his existence.

'Back to the Future' reunion

Actors Michael J. Fox and Christopher Lloyd share a hug on stage during a "Back to the Future" panel at Comic Con in New York City. (Credit: Federico Carestia via Storyful)

The movie has since earned the title as one of the greatest films ever made with two sequels, theme park rides and more in its multi-million dollar franchise.

"Back to the Future," which also starred Lea Thompson, Crispin Glover and Claudia Wells was made on a $19 million budget and has earned nearly $400 million at the box office.

The film received an Academy Award for best sound effects editing, and three additional nominations, including best original song for "The Power of Love" by Huey Lewis and The News.

The musical is already showing in London's West End.

This story was reported from Los Angeles. FOX News contributed.