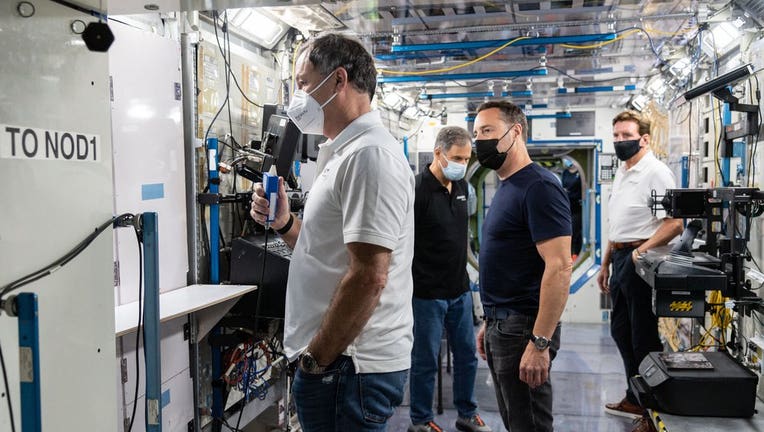 A former NASA astronaut and an international crew of paying customers will become the first to dock at the International Space Station as an all-private mission flying in SpaceX's Crew Dragon spacecraft later this month.

Houston-based Axiom Space has purchased several rides from SpaceX in the Crew Dragon to the ISS. The first all-private mission to the ISS is called Axiom-1.

The Falcon 9 rocket launch is targeted for March 30 at 2:46 p.m. EDT from Launchpad 39A at Kennedy Space Center in Florida.

Ahead of liftoff, the Ax-1 crew, along with Axiom Space, SpaceX and NASA officials spoke to reporters about the spaceflight training and how this first-of-its-kind mission will happen to the orbiting laboratory.

López-Alegría said he has been itching to get back to space since his days as a NASA astronaut. The Ax-1 crew have been following NASA's private astronaut syllabus for training and "have checked all the mandatory boxes," the mission commander said.

All four have been learning the ISS systems at Johnson Space Center, close to where Axiom Space headquarters are located, and Crew Dragon training at SpaceX facilities in Hawthorne, California.

López-Alegría said the crew has spent a lot of time preparing to conduct research and work on the ISS. He doubled down, saying Ax-1 is not a vacation for Axiom's customers despite the recent space tourism boom through companies like Blue Origin and Virgin Galactic.

"This mission is very different from what you may have heard of some of the recent, especially suborbital missions. We are not space tourists," he said. "I think there's an important role for space tourism, but it is not what Axiom is about. My crewmates have worked very hard. I've been super impressed with their diligence and their commitment, and they, you know, they're busy people, and they've taken a lot of time out of their lives to focus on this … it's definitely not a vacation for them."

The private spaceflights also fit into Axiom's business model to build a private space station, beginning with models added to the current ISS before separating becoming an Independent station in low Earth orbit.

Four astronauts arrived at the International Space Station after a daylong trip inside a spacecraft built by Elon Musk’s space company, SpaceX. 2021 has been the busiest year for human spaceflight in over a decade.

"This is our very first mission of probably hundreds of missions to come over the next several decades as we build the Axiom Space Station and provide sort of services in low-Earth orbit for many decades to come," Suffredini said. "So this is very exciting for us, for both of those reasons."

"Our crew members are focused on us getting ready for exploration and meeting the goals that NASA has and working on obviously maintain the facility and keeping us ready so that our private astronaut friends can come up and be able to do the science and research that we need to be able to do," Lueders said. "So very, very, very exciting time."

Suffredini stressed that the Ax-1 crew won't simply be tourists on the ISS and will contribute to necessary research conducted in low gravity.

"They're not up there to paste their nose on the window," he said. "They really are going up there to do meaningful research and make a difference each in their own way."

Christian Menger, Axiom Space director of in-space research and manufacturing, said the crew would bring more than 25 experiments with them.

"We're looking at things including stem cells, cardiac health, we're looking at spacecraft self-assembly and a lot of different experiments," Menger said. "Each of these projects have come to bear because of the interest in this crew. Early in the mission design process, they brought to us a portfolio of work. They said, ‘we really want to do some of these things in orbit,’ and it's been a pleasure to work with them and with NASA and the national lab to really bring these things to fruition for the crew."

Connor's tasks in space will focus on stem cell, cancer and aging research that will collaborate with the Cleveland Clinic and Mayo Clinic.

Pathy has been working with Canadian universities and the Montreal Children's Hospital.

Stibbe's work is a partnership with the Ramon Foundation and will be conducting several experiments with the Israeli Space Agency.

The crew will also bring home some NASA research and samples back to Earth.

Over the next few weeks, the soon-to-be astronauts will enter quarantine and finish some final training at JSC and in Hawthorne.

NASA previously gave Axiom approval to begin launching paying customers to the ISS starting this year. A second launch, Axiom-2, could launch late in 2022 or early 2023.