Actor and producer Daniel Dae Kim testifies before the House Judiciary Subcommittee on the Constitution, Civil Rights and Civil Liberties.

ATLANTA (AP) - Seven of the eight people killed were women; six were of Asian descent. The suspect, according to police, appeared to blame his actions on a "sex addiction."

While the U.S. has seen mass killings in recent years where police said gunmen had racist or misogynist motivations, advocates and scholars say the shootings this week at three Atlanta-area massage parlors targeted a group of people marginalized in more ways than one, in a crime that stitches together stigmas about race, gender, migrant work and sex work.

"In some ways this is another manifestation of the targeting of marginalized people in the U.S.," said Angela Jones, an associate professor of sociology at Farmingdale State College, State University of New York, whose research has focused on race, gender, sexuality and sex work.

The killings in Atlanta follow a wave of recent attacks against Asian Americans since the coronavirus first entered the United States, with the majority of reports coming from women. The 21-year-old suspect denied his attack was racially motivated and claimed to have a "sex addiction," with authorities saying he apparently saw massage parlors as sources of temptation.

Police told a news conference Thursday that investigators believe the gunman previously visited two of the massage parlors, but it's not yet clear if any the businesses offered sexual services. The Atlanta mayor said police hadn't previously been there beyond a minor potential theft. Still, the suspect equated the parlors to sex, and that drove him to kill, police said.

"There’s this assumption that all these massage parlor workers are sex workers. That may or may not be the case," said Esther Kao, an organizer with New York-based Red Canary Song, a group of Asian and Asian American sex workers and allies that does outreach to massage parlors. "The majority of massage parlors are licensed businesses that also provide professional, non-sexual massages."

Baker's office is helping to investigate the recent spa slayings that occurred in the Atlanta area.

"There’s this assumption of sexuality and fetishization of Asian women’s bodies that is unique to this kind of crime," she said.

At least one of the victims was a patron, not an employee. Thirty-three-year-old Delaina Ashley Yaun and her husband had gone to the spa on a date, her mother, Margaret Rushing, told WAGA-TV. Yaun leaves behind a 13-year-old son and 8-month-old daughter.

The shootings follow high-profile instances of race and gender-based killings in recent years by white men. In 2014, a 22-year-old who had railed against women online killed six people and wounded 14 near the University of California, Santa Barbara. The following year, eight Black church members and their pastor were shot and killed in a racist attack in South Carolina. In 2018, a Florida gunman with what police called a "hatred towards women" killed two and injured five at a yoga studio. The year after that a shooter targeting Latinos opened fire at an El Paso, Texas, Walmart, killing 22 people.

"This is a thread that is woven through the histories of these gunmen. Toxic masculinity is truly a problem in this country," said Shannon Watts, founder of the gun-control group Moms Demand Action.

Prostitution laws mean women also fear reporting harassment or violence to police, afraid of being arrested themselves or their pleas ignored, she said. Those fears are even more pronounced for women of color, those who are immigrants or those with few language skills. 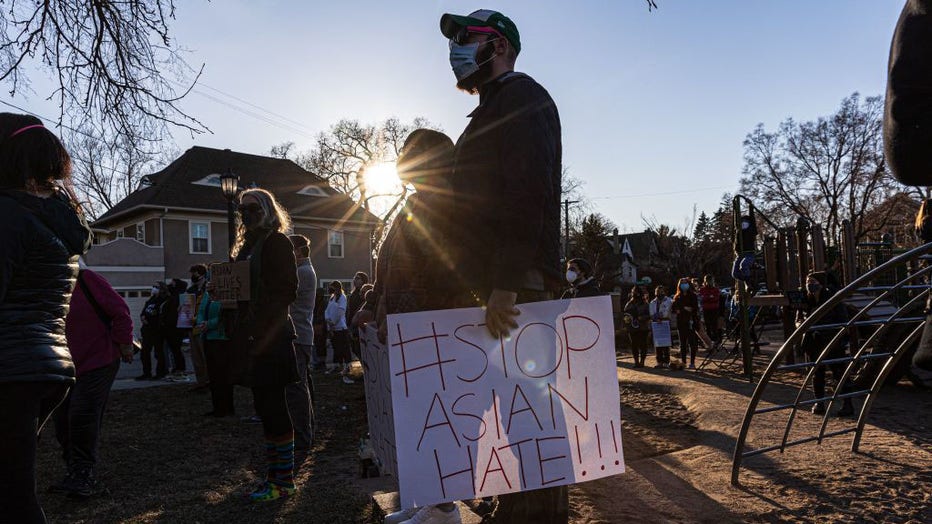 A protester holds a sign during the "Asian Solidarity March" rally against anti-Asian hate in response to recent anti-Asian crime on March 18, 2021 in Minneapolis, Minnesota. (Photo by KEREM YUCEL/AFP via Getty Images)

They feel they can't report crimes to police, said Barbara Brents, a University of Nevada, Las Vegas, sociology professor who studies the sex industry. "When they do, sex workers are not taken seriously and they’re also subject to arrest themselves."

Researchers who spoke to more than 100 Chinese and Korean workers at illicit massage parlors for a 2019 study found that while some women did say they felt deceived or coerced into jobs that involved sex work, many more chose the profession after having bad experiences in the few other types of generally low-paying jobs available to them, like restaurants and nail salons.

While there were some reports of exploitation or mistreatment by managers, an "alarming" 40% of women told researchers that a client had forced them to have sex in the last year, the study said.

In the Atlanta shooting, the suspect's claims of sex addiction, meanwhile, ring hollow for some. It is not a condition recognized by the American Psychiatric Association, said David Ley, a clinical psychologist and author of "The Myth of Sex Addiction." And while it was cited by celebrities for a time, the Harvey Weinstein case became an emblem of how it can be used as an attempt to avoid taking responsibility for abuse and assault, he said.

There’s also a disturbing thread of racism in some online discussions of sex addiction, he said.

The sex-addiction claim is a way to redirect blame, Kao said. "He’s absolutely taking no responsibility and putting all of that on the workers themselves and it also distracts from the race issue," she said.

Meanwhile, the suspect, Robert Aaron Long has been arrested on charges of murder and assault. It wasn't clear yet if he had a lawyer who would represent him.

Police said Long confessed to the crime and told officials about a "temptation for him that he wanted to eliminate."