New details have emerged in the murder of Nicole Montalvo. Detectives believed there was probable cause for the arrest of Montalvo's estranged husband, Christopher Otero Rivera, and his father, Angel Rivera.

ST. CLOUD, Fla. - New details have emerged in the murder of an Osceola County woman.

Detectives believed there was probable cause for the arrest of Nicole Montalvo's estranged husband, Christopher Otero Rivera, and his father, Angel Rivera. An affidavit for an arrest warrant was unsealed by a judge on Thursday and it reveals why the Osceola County Sheriff's Office arrested the two.

According to the document, the last two phone calls Montalvo made were to Angel Rivera and his wife Wanda just after 4 p.m. on October 21 from the area of her apartment. The warrant reveals that through cell site reconstruction, they saw that Montalvo traveled to the area of 3925 Hixon Avenue at 4:38 p.m.

Investigators said Montalvo did not pick up a call at 6:18 p.m. but that at 6:56 p.m., a message was sent from her phone to Angel Rivera’s phone which read, “I’m really sorry about everything. I should have listened to you. I made a bad mistake. I need you and Wanda to take care of Elijah for a few days until I get things figured out. Please do this for Elijah. I am with a friend that is going to help me get through this. Tell Elijah Mommy loves him.”

Then, they said at 7:04 p.m., Angel Rivera called Montalvo, but she did not answer. Her phone is still in the area of 3925 Hixon Avenue, which investigators said is the last location of travel for Montalvo and the place where she is last seen alive.

Deputies said that a search of the property turned up human remains, buried two to five feet into the ground towards the back of the 3925 Hixon property. Investigators specified those remains were human organs and appeared to have been cut with a cutting device. The size of the burial was consistent with an excavator type of machinery being used, deputies say.

A woman renting a room from Angel Rivera told investigators that on October 2, she saw a new tractor on the property and that Angel Rivera was operating it. Investigators said she also told them that Christopher was working with Angel in the back of the property and did not allow Elijah to join them. The arrest affidavit notes that at the time this happened, Christopher Otero Rivera was on house arrest and that his ankle monitoring device showed he moved around the property, specifically to the area of where the burial where the human remains were found.

Investigators also searched a property a few blocks away on Henry J. Avenue, owned by Nicholas Rivera. According to the arrest warrant, a neighbor told investigators a driver for Rental World had stopped by his property and was asking about picking up an excavator, saying a man named Angel Rivera had rented it. Investigators say that the excavator was equipped with a GPS system, which showed the excavator had traveled from 3925 Hixon Avenue to Nicholas’s property.

While the search was going on for evidence, the Osceola County Sheriffs Office said a friend of Montalvo’s called them. Investigators said she was concerned for Montalvo’s safety, stating that she had been having issues with Angel Rivera and Christopher Otero Rivera, as the two were trying to take full custody of Elijah and had both threatened and extorted Montalvo.

Despite these allegations, Rivera's defense attorney, prosecutors, and the judge all agreed that it's not enough for prosecutors to move forward in formally charging Rivera with 1st-degree murder at this time.  On Thursday morning the judge released Rivera on his own recognizance on the first-degree murder charge.  Right now, he is being held on a $350,000 bond on charges filed late Wednesday for abuse of a dead human body and failure to report a death. 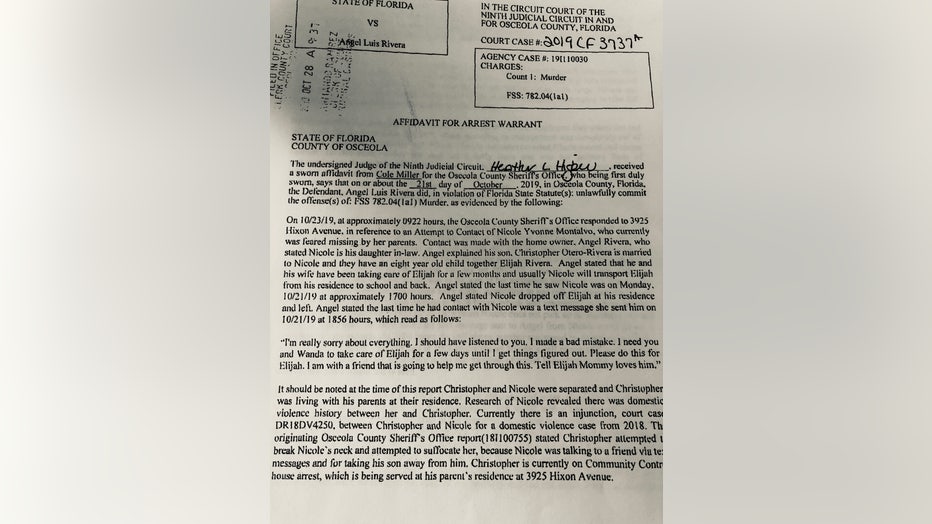 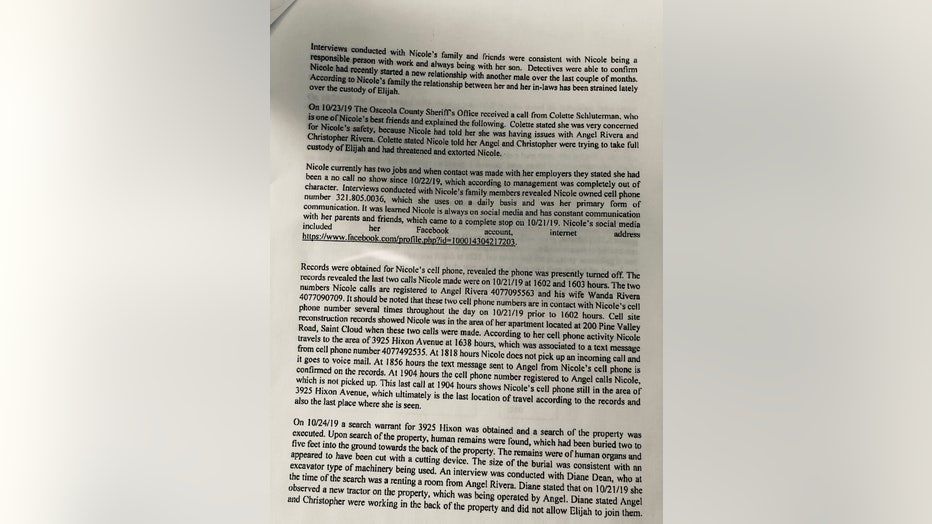 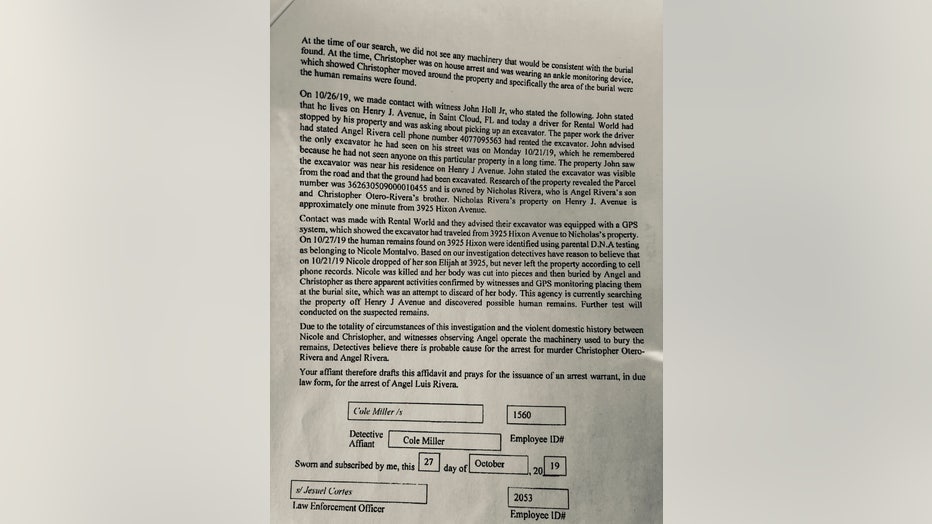