Staff and rescuers lined up the residents at The Bridge Assisted Living, then brought them out to boats with Orange County Fire, or to trucks with the Army National Guard.

ORLANDO, Fla. - Staff and rescuers lined up the residents at The Bridge Assisted Living, then brought them out to boats with Orange County Fire, or to trucks with the Army National Guard.

That trek included a slight mishap – one of the National Guard trucks ran over a median and tilted so severely, they had to move the elderly evacuees to another truck.

That was the third stop for these soldiers today.

They also evacuated a couple dozen people from Union Park, plus about 45 from Orlo Vista.

Orlo Vista is a neighborhood prone to flooding.

Frank and Sandra Tagariello know that, which is why they evacuated to Tallahassee for the worst of the storm.

When they got back, they saw water higher than their knees had flooded their street.

"In the back of my house, where the laundry room is and the back bedroom, water is about four feet high – three and a half, four feet high – and it’s going nowhere to recede, because the whole backyard is flooded too," said Frank Tagariello. 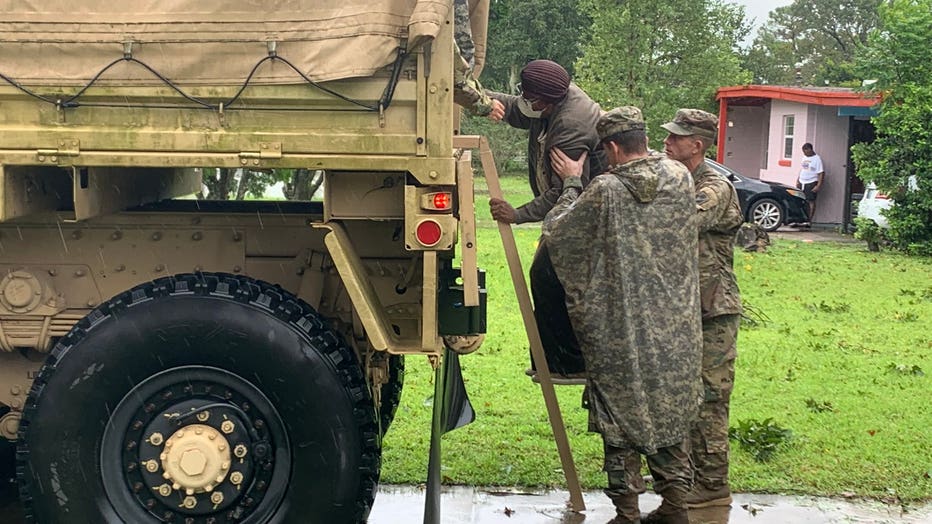 His house is one of dozens impacted in that neighborhood.

And some people in the area went through this same thing just five years ago with Hurricane Irma. Ashley Sims is one of them.

"We couldn’t do anything. It was like we were homeless – which we were, because we lost our home."

Sims says she couldn’t afford to move out after the house flooded in Irma. Now, with the water level in her house up to her chest, she says she’ll be homeless for a while.

"We lost everything. Everything is floating. That’s the hardest part, is trying to get back on your feet, because you don’t have nothing to start off with."

"I don’t know how much higher the water will come up, and that’s what we’re telling them – the folks in the community that were asking, but I don’t have that answer. I just know if they want to come with us, they can come with us, we’ll take them to a safer place."

FOX 35 saw the National Guard helping a woman into a truck who appeared to have trouble walking.

"Our subset helped out an elderly lady and a couple of disabled people to get them out of here, so they’re getting to safer places," said Lt. Dailey.

The Orange County Sheriff’s Office and Fire Rescue were working on evacuations too – including saving people’s pets.

But getting to safety is just the first step.

Drainage and cleanup come next.