Gov. Ron DeSantis announced the suspension of State Attorney Andrew Warren, who represents Florida's 13th Judicial Circuit in Hillsborough County. The governor said he is suspending Warren, an elected official, saying Warren thinks he’s above the law and has been "picking and choosing" what laws to enforce, citing the state's 15-week abortion ban as the most recent example.

TALLAHASSEE, Fla. - An elected Florida prosecutor who was removed from office by Gov. Ron DeSantis because of his positions on abortion and transgender rights filed suit Wednesday to get his job back, saying the Republican leader violated his First Amendment rights. 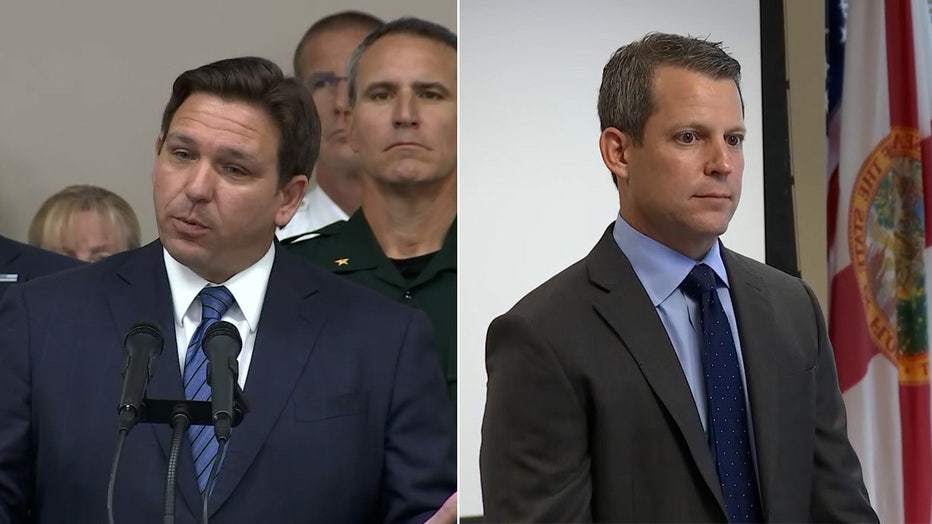 DeSantis, who has come under attack by Democrats for his support of abortion restrictions and bills he’s signed that are seen as anti-LGBTQ, held a campaign-like event to announce Warren’s suspension, with supporters cheering the decision.

Now seeking re-election in November and positioning himself as a potential 2024 presidential candidate, the governor cited Warren’s "neglect of duty" and other alleged violations.

"What’s happening here is, he’s trying to throw out a free and fair election," Warren said on CNN early Wednesday. "Even my 8-year-old understands this."

Warren described the pledge circulated by prosecutors around the country as "a value statement," not a definitive decision on how he might handle any particular case. He also noted that Florida’s new ban on abortions after 15 weeks of gestation has been ruled unconstitutional, and that the state doesn’t even have a law against hormone treatments for transgender minors.

Warren’s lawsuit says the suspension was retaliatory after he opposed the governor on a number of issues, including DeSantis’ efforts to deny the restoration of voting rights for felons and create new crimes for public protests in response to the Black Lives Matter movement as well as the new abortion restrictions.

"Of course, DeSantis is free to express his views and his disagreements with Warren as often as he likes. Indeed, the Federal Constitution ensures that he is," the suit says. "DeSantis went too far."

The suit says Warren has an obligation to voters to say where he stands on such issues, and that as a prosecutor, he has the right to decide how the limited resources he has should be used to prosecute crimes. That priority should be on public safety, it said.

"The First Amendment protects the right of elected officials to speak out on matters of public controversy, and in fact it does so because it’s so important that the voters who choose these elected officials know where they stand on these issues," Jean-Jacques Cabou, a lawyer for Warren, said in a phone interview.

Warren’s suspension is now an issue in the governor’s race as Agriculture Commissioner Nikki Fried, the state’s only statewide-elected Democrat, and Democratic U.S. Rep. Charlie Crist enter the final week of the primary to see who will challenge DeSantis.

"For this governor to weaponize his office and remove a state attorney — a prosecutor — who has prosecutorial discretion over which cases he brings forward and which he doesn’t, this is the overreaching and overstepping of this governor," Fried said at a campaign event Tuesday night. "It is the most dangerous thing to our democracy that we have seen."