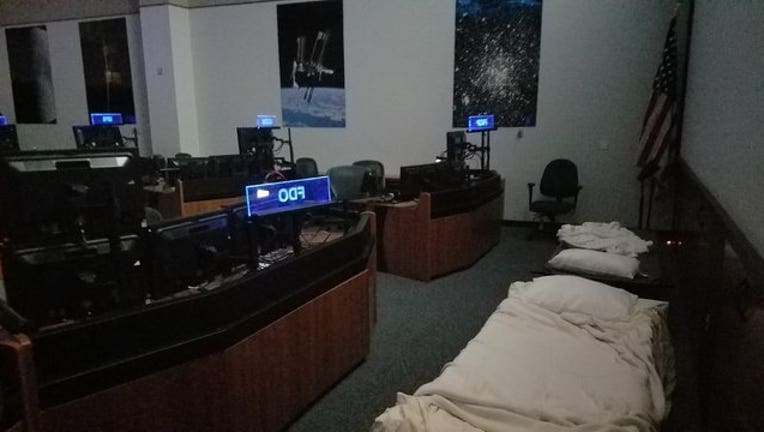 HOUSTON (FOX 26) - A small group of “essential personnel” has remained at NASA’s Johnson Space Center in Houston, locked in due to flooding from Hurricane Harvey. Flight control of the International Space Station is continuing in the Mission Control Center, which will remain in operation. Among the highest priority mission activities is the landing of three crew members this weekend.

“The roads around the Johnson Space Center for the most part are impassable,” NASA flight director Royce Renfrew said in an interview with NPR. “And what we did there is just set up cots for the flight controllers who came off shift so they had some place to stay and didn't have to get out in the weather.”

Johnson Space Center will remain closed to all but essential personnel through Labor Day due to the effects of Harvey. The closing allows NASA employees to avoid dangerous road conditions, and to be with their families.

“Our primary concern is the safety of our employees and all our fellow Houstonians," said a statement from Johnson Space Center director Ellen Ochoa. “We’re taking these measures to ensure the members of our team and their families can take care of themselves and their neighbors.”

Renfrew shared several images from inside Mission Control on Twitter. He also shared a “Hurricane Harvey Ops Team” logo with the Latin phrase, “Ad Astra Per Aqua,” or “To the stars through water.”

Renfrew told NPR a number of ISS crew members have family in Houston, so they have been sending back images of Harvey taken from space.

NASA said all backup systems required to maintain the James Webb Space Telescope were checked prior to Harvey’s arrival, and are ready for use if necessary.