An Orlando couple is opening the doors of their home to 14 ballerinas and teachers from an impoverished neighborhood in Peru so they can compete in an international ballet competition in Florida. The group arrived at Orlando International Airport on Tuesday and will spend the Thanksgiving holiday in America.

ORLANDO, Fla. - They have worked for years to overcome tough odds, but 14 little girls from Peru were able to smile as they accomplished their lofty goal and stepped off a plane into Orlando on Tuesday.

Paola Ramirez eagerly greeted the girls in Spanish as they walked into Orlando International Airport from customs.

“Last night the teacher was telling me that they were jumping, excited, ready to come,” said Ramirez.

FOX 35 first reported Friday about Paola and husband Pedro’s efforts to help the group get to Orlando from a home where many of the girls do not have much. The girls are part of a ballet school in one of the poorest neighborhoods of Lima, Peru. Even running water there is a luxury for many. 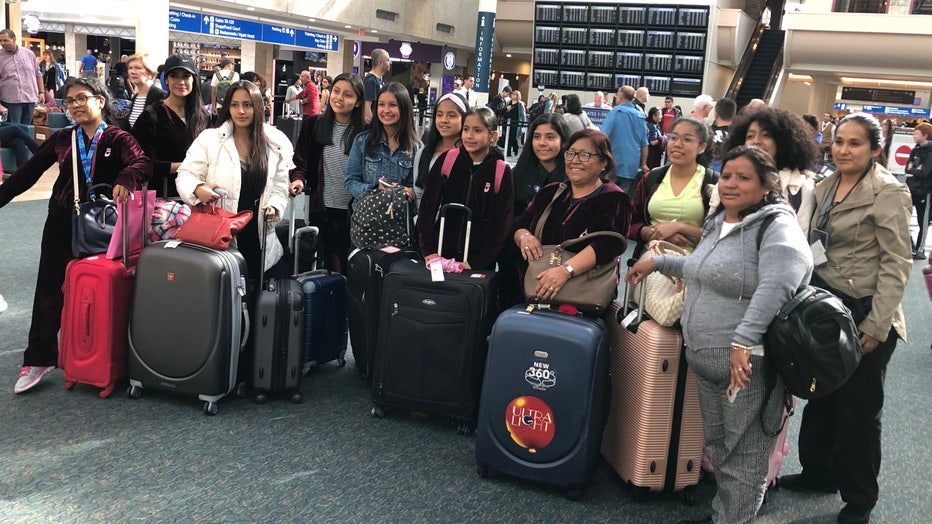 However, that neighborhood is where former professional ballerina Maria del Carmen Silva runs a class for young girls out of an empty classroom in a public school. She teaches them to strive and prepare for a future outside of their current situation.

The girls, ages six to nine, have fallen in love with the art. As part of Silva’s mission, she wanted to bring the girls to compete in a real, international ballet competition here in Orlando. Since many of the girls cannot afford dance shoes, nonetheless international plane tickets to the Sunshine State, the team has walked the streets of their neighborhood collecting plastic bottles and recyclables to fund their airfare.

Meanwhile, Paola and Pedro, who are natives of Peru themselves, told the team that if they could earn their way to the plane tickets, that they would be their hosts in Orlando, opening their home for the girls to stay. They even offered to cook a big Thanksgiving dinner to welcome them to America and wish them luck.

Knowing the conditions of their home first hand, as well as all the work the girls have put in to better their lives, Paola and her friends in town wanted to make sure the trip was extra special for the girls, so they launched a GoFundMe to send the team to Disney World for a day while they are here. Since our story Friday, that account easily surpassed its goal and Paola said the girls would be surprised with the trip on Wednesday.

“We raised more than that, actually $2,700,” said Paola who set the original fundraising goal at $2500. “They gonna be able to bring some money home.”

That extra money will help the team continue to fund their ballet school and gear for competition.

Many of the girls, none of whom speak any English, looked around Terminal A of Orlando International in awe Tuesday; clearly thrilled to finally start their journey. As Paola and the girls walked toward the doors to begin their trip, it was clear no matter the results of the coming competition, the hard work had paid off.