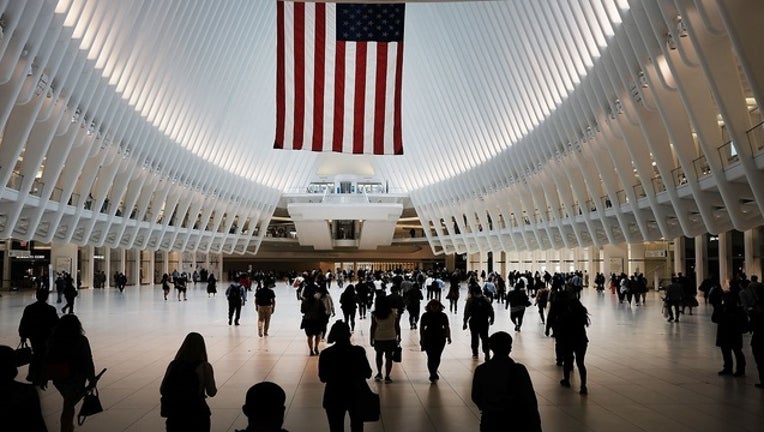 People walk through the Oculus located at the World Trade Center site during a morning commemoration ceremony for the victims of the terrorist attacks 17 years after the day on September 11, 2018. (Photo by Spencer Platt/Getty Images)

FOX NEWS - About 17 and a half years after the 9/11 terror attack on the World Trade Center, first responders are finally getting their own tribute at the Memorial Plaza on the Ground Zero site.

Called the Memorial Glade, it’s a path winding through the southwest corner of the plaza, lined with six granite monoliths, each weighing between 13 and 18 tons, hand-chiseled at the Rock of Ages Manufacturing Company in Vermont.

The stones are inlaid and bound with strips of steel salvaged from the Twin Towers, and the stones are designed to point skyward, symbolizing strength and determination, according to the designer, who said they were crafted to look bruised but not broken, representing the strength of human spirit.

Tens of thousands of police officers, firefighters, federal agents, paramedics and civilian volunteers spent days, weeks and months working on the pile, searching for victims, clearing rubble and debris, and restoring order to the chaos, while breathing toxic fumes, leading to thousands of serious illnesses and deaths.

“For some, the end of the recovery was the beginning of even more difficult journey of sickness and disease. Tragically, not all who labored so valiantly for their city and country in the aftermaths of the attacks survived.”

One of those deeply affected was now-retired firefighter Rob Serra, who graduated the FDNY academy the day before 9/11 and spent several days at the scene, his first real job with the department.

He developed throat polyps and then a series of debilitating illnesses that left him in a wheelchair, fighting for his life. He said he doesn’t regret his actions, that he was doing the job he was hired to do. But he admits he would’ve liked a better mask to protect himself, and appreciates the Glades message.

“I think it’s important because we said we’d never forget. I mean on September 12 the sense of patriotism and love for this country was palpable. And over the last 17 years, we’re still fighting for our benefits in Washington.”

The Glade was dedicated on Thursday, the 17th anniversary of the official conclusion of search-and-recovery efforts and is now open to the public, serving as a compelling reminder of selfless heroism and sacrifice and the struggles and challenges so many continue to face.