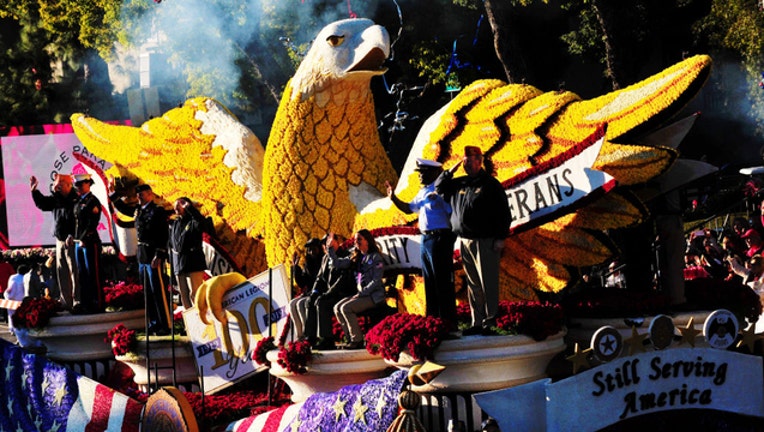 PASADENA, Calif. (FOX 11) - Floral floats and marching bands took to the streets under a sunny California sky as the 130th Rose Parade drew hundreds of thousands of spectators on New Year's Day and millions more watched on TV.

Among the fanciful floats was an award-winning entry from the UPS Store that featured a book-reading, ballet-practicing ostrich named Olive decked out with more than 30,000 pale pink carnations.

The annual extravaganza in Pasadena kicked off with a performance by singer Chaka Khan, the grand marshal of the parade, and featured 40 floats decorated with countless flowers and waving celebrities. The theme was "The Melody of Life."

There was plenty of sunshine and calm breezes, with temperatures reaching about 60 degrees after a chilly and windy night. Dozens of people staked out prime viewing spots on Monday and slept bundled up along the route, where overnight temperatures dipped into the 30s.

The parade was briefly interrupted when a float celebrating U.S. railroad heritage broke down and erupted in smoke. Marching bands were able to move around the Chinese American Heritage Foundation's "Harmony Through Union" entry, but other floats couldn't, causing a brief backup.

The disabled float was eventually towed from the route, and the parade resumed. The interruption caused long gaps, and some people began leaving until a monitor came along yelling, "The parade's not over!"

Spectators shouted, "Thank you," to U.S. Forest Service firefighters marching behind a float with Smoky Bear and traded "alohas" with horseback riders from Hawaii.

California Polytechnic State Universities' entry, "Far Out Frequencies," was awarded for its use of statice, marigolds and strawflowers grown on the San Luis Obispo campus. It featured a pair of astronauts playing music to communicate with aliens they encountered on a distant planet.

Along with the many floats, the parade featured 18 equestrian groups and 21 marching bands. Among them are bands from Ohio State University and the University of Washington, whose teams will compete in Tuesday's Rose Bowl.

Local high school senior Louise Deser Siskel was crowned the 101st Rose Queen. She wrote in an op-ed in the Los Angeles Times about how she would use the platform to advocate for science education, the importance of science informing public policy and the value of inclusion.