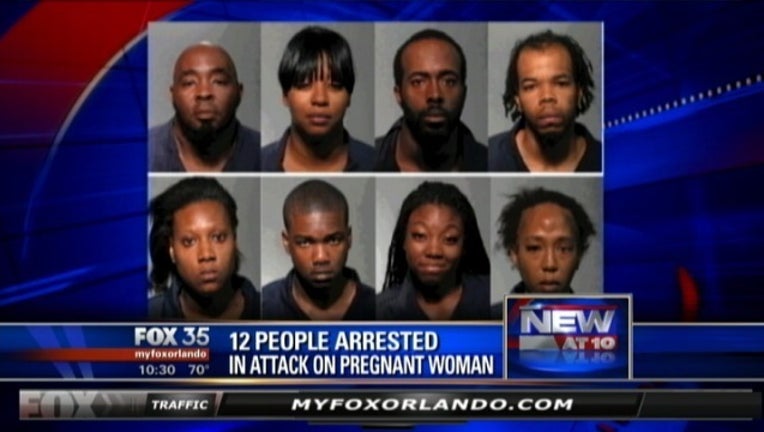 A pregnant woman is recovering from an attack after Seminole County Sheriff's deputies said she was beaten during a brawl in Sanford by 12 people, including four juveniles. The youngest suspect is 12 years old.

Neighbors said the fight broke out on Sunday just after 10 p.m. in the Palm Point subdivision along Daffadil Terrace.

"The kids down there were with one another down there," said Danny Hughes, a neighbor. "Then the parents got in it. Lord, have mercy."

One 911 caller said one suspect grabbed a gun during the altercation.

"They're down here fighting each other with guns!" said the caller to dispatchers.

"Boom. Boom. Boom," said Hughes."They threw something. I don't even know what they threw. I heard the glass break. I think she got hit, and that's when the police came."

The Sheriff's Office report revealed that the victim, Ashley Flournoy, was hit in the head.  Flournoy is who is six-months pregnant.  Flournoy's sister, Terika Young, and mother, Susan Young, tried to help but were also beaten. The report also revealed one attacker yelled, "I don't care you're pregnant."

Deputies told FOX 35 the attack may have started because of an ongoing feud between neighbors.

The public defender argued Monday morning that Herring didn't realize Flournoy was pregnant. The judge said Herring violated his probation. He was ordered to stay away from the victims.

We're told Flournoy and her mother and sister are OK.