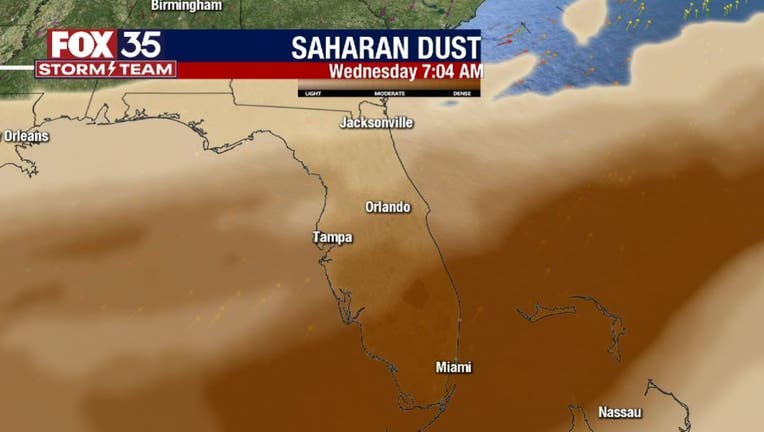 ORLANDO, Fla. - A massive Saharan dust cloud is expected to pass over Florida this week and it could make for some beautiful skies.

Saharan dust is said to making its way from the coast of Africa to the Gulf of Mexico. It is expected to be over Florida during the middle of the week, with its thickest dust on Wednesday. However, thinner amounts will stick around through at least Saturday.

The plume of dark brown colors is where the thickest dust will be over the Florida peninsula. 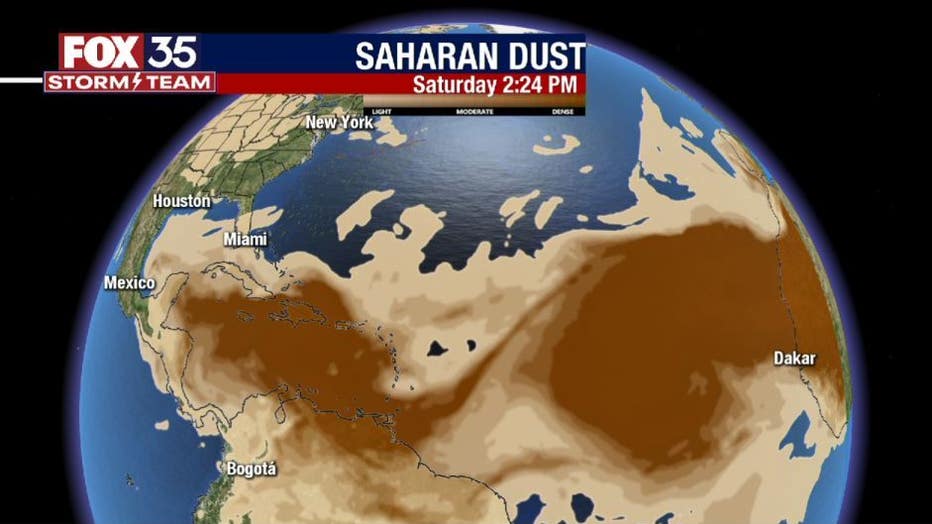 Frank Marks, director of the Hurricane Resarch Divsion at NOAA's Atlantic Oceanagraphic and Meteorological Laboratory, says that these plumes are frequent in the summer, especially in June and July, and take about 10-12 days to cross the Atlantic.

"The arrival of a dust cloud is usually a good thing during hurricane season as it keeps tropical development to a minimum," FOX 35 Storm Team Chief Meteorologist Jayme King explained. He added that it can "also make for some of our prettiest sunrises and sunsets. Sunlight refracts off of the dust particles producing a beautiful outcome on the color spectrum. Pinks, oranges and reds are the norm."

Although much of the dust remains above the surface and causes hazy skies and colorful sunsets, it can aggravate those with respiratory issues. This is not likely to cause major deterioration in the air quality for the U.S. at large though, since the dust is elevated and concentrations are continually and gradually dissipating. Additionally, water vapor present in the South will wash away dust particles.

However, the increased clouds and high rain chances in Central Florida could keep this phenomenon at bay. Skies will be very cloudy and rain chances high through Wednesday, the latest models show.

We will continue to track these conditions in the FOX 35 Storm Center.